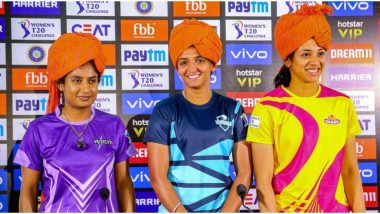 Women's IPL Will be Held Be Held in UAE This Year (Photo Credits: Twitter)

Fans could be in for a double bonanza when the IPL 2020 gets going in the United Arab Emirates (UAE) this September with the BCCI also planning to fit in the women’s IPL or T20 Challenge into the same schedule. The apex Indian cricket board came under heavy criticism after it announced to host the 13th edition of the Indian Premier in UAE but decided against sending against the Indian women’s cricket team to England for a limited-overs series. BCCI president Sourav Ganguly, however, stated on Sunday that plans of playing the women’s IPL is “very much on.” Women’s IPL Will Go Ahead As Planned, Confirms BCCI President Sourav Ganguly.

The men’s IPL 2020 will be played between September 19 and November 8 in UAE later this year. The T20 franchise tournament was shifted away from India due to the rapid surge in COVID-19 cases in the country. The shifting of the IPL to an abroad location, combined with BCCI’s decision to cancel Harmanpreet Kaur-led Indian women’s tour to England, led to the criticism of the board for allegedly not having a plan for women’s cricket. Ganguly, however, said that the women’s T20 matches will be fit into the men’s IPL schedule. Mithali Raj and Co Welcome BCCI President Sourav Ganguly's Announcement on Women's IPL 2020.

"I can confirm to you that the women's IPL is very much on and we do have a plan in place for the national team also," Ganguly said. But refrained from announcing the exact date and schedule of the women’s IPL. But according to a BCCI source, quoted by news agency PTI, the women’s T20 Challenge of women’s IPL could be played during the last phase of the men’s IPL.

"The women's Challenger series is likely to be held between November 1 and 10 and there could be a camp before that," the source said. The announcement brought great relief among many Indian women’s cricketers with Mithali Raj and Poonam Yadav thanking the BCCI chief for the announcement.

This is excellent news . Our ODI World Cup campaign to finally kick start . A big thank you to @SGanguly99 @BCCI @JayShah and thank you @BoriaMajumdar for your support to women’s cricket . https://t.co/JpJSMGapzV

“This is excellent news. Our ODI World Cup campaign to finally kick start,” said Raj in a tweet. The Indian women’s team last played at the ICC women’s T20 World Cup in March and have been out of action since then. A player like Mithali, who only plays WODIs, last played in November. Ganguly, however, refrained from announcing the schedule, number of teams and matches for the women’s IPL.

Earlier, Indian women’s T20 captain Harmanpreet Kaur, in a conversation with Cricbuzz, had stated that the board could easily form six teams – the last women’s IPL had three teams – for the next edition of the women’s IPL. She cited the exposure and experience it will being for young women’s cricketers in the country and also help in discovering talents like Shafali Verma for the national team.

But although Ganguly, who is currently awaiting a Supreme Court verdict to waive off the cooling period and allow him to continue as the BCCI president, did not divulge any further details he said that women’s team will have a national camp later this year. "We couldn't have exposed any of our cricketers - be it male or female to health risk. It would have been dangerous,” said Ganguly. “we have a plan in place and we will have a camp for women, I can tell you that."

Reports state that the Indian women’s team could play consecutive ODI series towards the end of the year before travelling to New Zealand for women’s ODI World Cup next February.

(The above story first appeared on LatestLY on Aug 02, 2020 04:45 PM IST. For more news and updates on politics, world, sports, entertainment and lifestyle, log on to our website latestly.com).