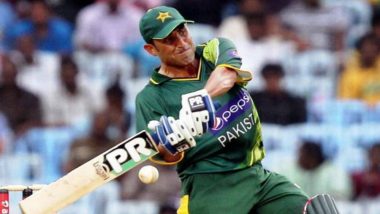 Lahore, May 25: Former Pakistan captain Younis recently spoke about the ill-behaviour of his teammates and went on the extent of saying he was considered a madman for speaking the truth during his time as captain of the team.

Younis is regarded as one of the finest batsmen in the history of Pakistan cricket and he is also the leading run-getter for them in the longest format. He revealed some players didn't like it when he pointed out that they weren't giving their all for the country but also mentioned that they were remorseful later.

"You often face a situation in life where if you speak the truth, you are considered as a mad man. My fault was pointing out to a group of players that they were not pushing themselves hard enough on the field for the country," Younis was quoted as saying by Gulf News.

"The players were, however, regretful later and we played as teammates long enough after that. I knew I had done nothing wrong for it's a lesson that I had learned from my father – to always speak the truth and always remain humble."

Younis also spoke about the rise of batsman Babar Azam, who was recently made the ODI captain on Pakistan. Azam has been compared with India skipper Virat Kohli for a while now but Younis believes he still has a long way to go before he can be compared with the Indian talisman.

"You see, Kohli - who is now 31 and at the peak of his career - has been in international cricket for over a decade and has proved himself in all conditions. The 70 international centuries that he has scored is a testimony to his class and abilities," Younis said.

"Babar, on the other hand, made his international debut barely five years back. He already has 16 centuries under his belt and shows very good averages in both Tests and ODIs, but it will be unfair to start comparing the two right now. If you have to, compare Babar five years (from now) with the dominance that Kohli is showing in his game today," he added.

(The above story first appeared on LatestLY on May 25, 2020 05:36 PM IST. For more news and updates on politics, world, sports, entertainment and lifestyle, log on to our website latestly.com).