For most members of the men's hockey team at the Commonwealth Games here India gained a silver medal in Birmingham, for goalkeeper PR Sreejesh the team lost a gold. 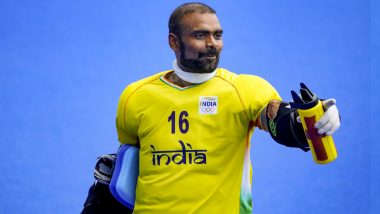 Birmingham, Aug 8: For most members of the men's hockey team at the Commonwealth Games here India gained a silver medal in Birmingham, for goalkeeper PR Sreejesh the team lost a gold. It is a matter of perception -- if you want to see the glass as half-filled or the hall empty. Sreejesh chose to see it as an opportunity lost. India did well to reach the final of the men's hockey competition here in a strong competition that involved World No 1 Australia, England, New Zealand, Canada, South Africa, Malaysia, and Pakistan. However, the 0-7 thrashing India received at the hands of Australia in the final proved a dampener on the team's celebrations. The Tokyo Olympic bronze medallists were happy to win a medal, having gone medal-less from Gold Coast in 2018. CWG 2022 Day 11 Results: India Settle For Silver After Loss Against Australia in Men's Hockey Final at Commonwealth Games.

"We didn't win a silver medal, we lost gold. It's disappointing, but in a tournament like the Commonwealth Games, getting into the finals is a great thing. "There are a lot of youngsters in this team, so this is going to be a good lesson for them. If you want to win the major medals you need to meet top teams like Australia in the finals or semifinals. You have to mentally and physically prepare for that," Sreejesh said after the match. "As the most senior [in the team] this is my second time losing in the final (after 2014), so it's quite hard, but for the youngsters, this is going to be great learning."

Sreejesh said the team will learn from this event and play better in bigger events like next year's World Cup in Odisha and the Asian Games in Hangzhou in /China. "These sorts of tournaments give us more experience - how to handle the pressure, how to come up, how to push yourself high when you're down or when you prepare for a match. "Now the players are getting the rhythm, getting into the semis and finals. Once you learn how to get there then they're going to be the champions," Sreejesh said. India captain Manpreet Singh said it was one of those days when his team could not play its game. Team India at Commonwealth Games 2022 Recap: A Look at Medal Winners and Performances of Indian Athletes At Birmingham CWG.

""They played a good game, but we didn't play our own game. We made a couple of mistakes and they took advantage and scored against us. "This is the best hockey in the world, they are one of the best teams in the world. You can't make mistakes against these kinds of teams." Manpreet said silver was not the medal they come here for. "This was not the result we wanted. A good fight, a closer result... then we would be happy, but this is not the result we wanted. We could have done something more, we could have created more opportunity, but we didn't play our best game," said Manpreet Singh.

(The above story first appeared on LatestLY on Aug 09, 2022 09:56 AM IST. For more news and updates on politics, world, sports, entertainment and lifestyle, log on to our website latestly.com).