Jose Mourinho Defends His Managerial Record, Says ‘What Is Considered a Disaster for Me Is Something Other Coaches Have Never Achieved’

Jose Mourinho has been one of the world's most decorated managers, winning atleast one trophy in all the clubs he managed. He could have won one at Spurs too, but he was sacked before they played the League Cup final. 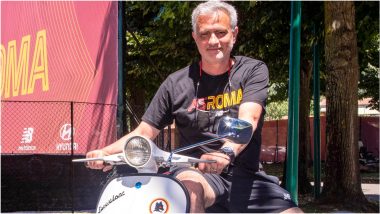 Jose Mourinho, was was recently appointed by AS Roma as their head coach claimed that he attained a considerable amount of success, saying that what was a "disaster" for him was something other gaffers could not attain.  He was named Spurs coach after Mauricio Pochettino was sacked after a string of poor results. Before managing Tottenham, Mourinho had experience of management in the Premier League with Manchester United and Chelsea. He was just midway last season just before Spurs played the League Cup final. A total of 10 defeats in the Premier League season--something that had happened for the first time in his career as manager--led to his dismissal.Euro 2020: Jose Mourinho, Arsene Wenger React to England’s Controversial Penalty vs Denmark

"What is considered a disaster for me is something other coaches have never achieved in their lives," Mourinho, while attending a press conference ahead of his start as Roma head coach, said. "But that's the way it is and that's down to me. At my last three clubs I won the Premier League with Chelsea, I won three trophies with Manchester United and I made it to the League Cup final with Tottenham," he added.

Mourinho has been achieved the status of one of the most successful football coaches in world football. He had successful spells with Real Madrid in Spain, Inter in Serie A and Porto in the Portuguese Liga NOS. He has won a total of two Champions League titles, three Premier League trophies, two Serie A championships and two Europa League titles, amongst others. He has won a trophy in every club he has managed so far, with the only exception being Spurs.

(The above story first appeared on LatestLY on Jul 09, 2021 02:14 PM IST. For more news and updates on politics, world, sports, entertainment and lifestyle, log on to our website latestly.com).