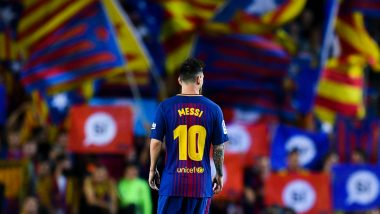 Barcelona is locking horns with Osasuna tonight in the La Liga 2019-20 tie. It is almost next to impossible to win the league title from here on, but Barcelona would still want to stay in the hunt. As it is things haven’t been at the best in the Catalan Giants camp. Not just tactically but also if reports are to be believed, Lionel Messi could make an exit from the team. Anyway ahead of the game, the Catalan Giants declared 22-member squad for the game. Antoine Greizmann is out of the squad due to an injury. However, Frankie de Jong who got injured during one of the training sessions of the team makes a comeback into the squad. The fans were quite excited to see his name in the squad. Barcelona vs Osasuna, La Liga 2019–20 Free Live Streaming Online & Match Time in India: How to Get Live Telecast on TV & Football Score Updates in IST?

Barcelona is currently placed on number two of the La Liga 2019-20 points table with 79 points, whereas their arch-rivals Real Madrid is on number one with 83 points. This is their final home game for the season which the team would want to win. Apart from Greinzmann, Samuel Umtiti and Ousmane Dembélé were the ones who are remaining out. Now, let’s have a look at the squad and then the reactions by netizens:

Frenkie De Jong is back.

Frenkie, Puig and Ansu aaaaahhh inject it into my veinssss

Osasuna also has injury concerns. Chimy Ávila, Marc Cardona will remain out. Robert Ibáñez, Unai García would be the ones who would have been ousted from the game. Rubén Garcí remains doubtful. The match will begin at 12.30 am IST.

(The above story first appeared on LatestLY on Jul 16, 2020 06:32 PM IST. For more news and updates on politics, world, sports, entertainment and lifestyle, log on to our website latestly.com).