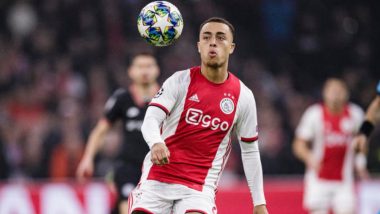 Sergino Dest has decided to join Barcelona and has already bid goodbye to his Ajax teammates following their 2-1 win over Vitesse Arnhem in Eredivisie. The United States international is expected to fly to Camp Nou this weekend and complete his medicals. Dest has also been linked with Champions League winners and Bundesliga giants Bayern Munich but has decided to join the Catalan giants. According to reports, Barcelona are yet to agree on a deal with Ajax but have already discussed personal terms with Dest. The player will sign a five-year contract. Barcelona Transfer News Latest Update: Ronald Koeman Drops Huge Hint Regarding Memphis Depay.

Dest, 19, did not start the match against Vitesse Arnhem and came off the bench as a late substitution in what could have been his final appearance for the Dutch club. Ajax coach Erik ten Hag also spoke on the speculations surrounding Dest but refused to confirm his deal with Barcelona. Hag informed that both Bayern and Barcelona have enquired about the player and both are interested in the right-back but neither have reached an agreement with the club for a sale.

But according to a report from Fabrizio Romano, the player has already decided to join Barcelona and bid goodbye to his teammates on Saturday. He also informed that Barcelona and Ajax are close to negotiating a deal towards the right-back and Barcelona are confident of completing by this week. Dest would cost around 25 million Euros.

Bayern Münich are still in contact with Ajax board - that’s why they feel to be still in the race. But Dest wants to join Barcelona. He’s already agreed personal terms until 2025 [as he did with Bayern days ago].

The popular transfer journalist also informed that Bayern Munich are still in the race for the player and are in contact with Bayern Munich but Dest prefers to join Barcelona and has already agreed personal terms with the La Liga club until 2025. Barcelona sold their right-back Nelson Semedo to Wolves earlier this week and need to sign a right-back to provide competition for Sergio Roberto.

Meanwhile, Barcelona are also close towards completing a deal for Memphis Depay and expect to sign the Dutch forward before the October 5 deadline day. The club have already agreed personal terms with Depay and are currently in discussion with Lyon to negotiate a deal. Barcelona begin their La Liga campaign on September 27, 2020 (Sunday) with an away trip to Villarreal.

(The above story first appeared on LatestLY on Sep 27, 2020 09:01 AM IST. For more news and updates on politics, world, sports, entertainment and lifestyle, log on to our website latestly.com).