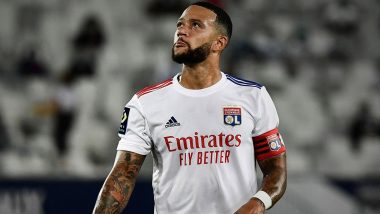 Barcelona are very much active in the transfer market as they look to rebuild their squad following the humiliation in the Champions League. Luis Suarez, Arturo Vidal and Ivan Rakitic have left the club but the Catalan side are yet to bring in any major signing in this window, apart from Miralem Pjanic, who joined the club from Juventus. And before the season begins, manager Ronald Koeman had dropped a huge hint regarding some new arrivals. Barcelona Transfer News Latest Update: Memphis Depay Agrees Personal Terms With Catalan Giants.

Barcelona are looking to sign a new centre forward for their team following the departure of Luis Saurez to Atletico Madrid. Lautaro Martinez and Memphis Depay are tipped to be the players who could replace the Uruguayan in the Catalan team but in recent weeks talks regarding the transfer of the two players seem to have hit a dead end. Memphis Depay Transfer News Latest Update: Barcelona Suffer Huge Blow in Dutch Star's Pursuit As Lyon Give Striker New Squad Number.

However, manager Ronald Koeman has not ruled out the signing of either player but has stated that Memphis Depay is the ‘main’ target. ‘I’m not ruling anything out. The real target for Barça is Memphis Depay. First bid ready to be submitted by weeks’ the Dutch manager said during a recent pre-match interview.

It was earlier reported that Barcelona had submitted a bid of €30 million plus add ons to Lyon for Memphis Depay, who is understood to have agreed personal terms with the club. However, the move was stalled after La Liga banned the Catalan club from signing new players as the club are in a financial crisis and have asked them to generate money from sales first.

Barcelona till now have sold the likes of Arturo Vidal, Ivan Rakitic and Luis Suarez but all those players have left for free or on a little to no transfer fee. So despite this sales sufficient funds might not have been generated which could see more delay on the signing of Memphis Depay.

(The above story first appeared on LatestLY on Sep 26, 2020 09:08 PM IST. For more news and updates on politics, world, sports, entertainment and lifestyle, log on to our website latestly.com).