The Barcelona skipper did not want to be in Spain at the start of the season with his heart set on a move to England with Manchester City. But Barcelona did not accede to his demands and the guy whose name is synonymous with the El Clasico will feature in it again. Expect Lionel Messi to dictate play. 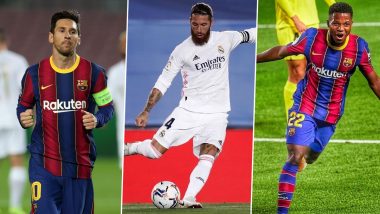 When Barcelona and Real Madrid clash in the El Clasico, it invariably results in the polarisation of not only football fans but also two footballing philosophies. At one side we have the Tiki-Taka of Barcelona and on the other the fast counter-attacking game of Real Madrid. For years, this has not changed much despite changes in management. This evening, we gear up for the latest edition in this great rivalry. Barcelona & Real Madrid Announce Squads for El Clasico 2020-21, Check Out Predicted Line-Ups for BAR vs RM.

Despite a slow start, the world-class talent at disposal of the two clubs means there should not be any dip in the quality of the clash. Ahead of the El Clasico, we look at five players who can have a say in the outcome of the clash. Lionel Messi's Record in El Clasico: Ahead of Barcelona vs Real Madrid La Liga 2020-21, Here's A Look at Argentine Great's Stats in Spanish Football’s Biggest Rivalry.

The 17-year-old wonderkid, a product of the Barcelona academy, has made an impressive start to the 2020/21 season. With 4 goals and 2 assists so far, he has quietly earned himself a slot in the Barcelona and Spain’s preferred starting eleven. Real Madrid have looked shaky at the back and will not enjoy Ansu Fati terrorising them with his pace.

The Barcelona skipper did not want to be in Spain at the start of the season with his heart set on a move to England with Manchester City. But Barcelona did not accede to his demands and the guy whose name is synonymous with the El Clasico will feature in it again. Expect Lionel Messi to dictate play by dropping deep allowing the likes of Phillipe Coutinho and Ansu Fati to take up dangerous positions.

Real Madrid will breathe a huge sigh of relief with the return of their talismanic skipper Sergio Ramos for the Barcelona clash. A  brilliant reader of the game and a goal-scoring threat in the opposition half, Sergio Ramos is a multi-dimensional player. His duel with Lionel Messi will have a long way in determining the outcome of the clash.

Ever since returning from Bayern Munich as a European champion, Philippe Coutinho seems to have got his rhythm back. He has a slot in as a no 10 seamlessly and dictates play in the final third for the Catalonians. He will like to his tally of 2 goals and 2 assists so far in the season against arch-rivals Real Madrid.

The Brazilian youngster was a raw talent at Madrid when he joined the club in 2018 and was trolled for his poor finishing. But he has learnt to be composed in front of goal now which makes him a real threat.  He will be eager to make it a second season running when he has scored against Real Madrid. Both the sides have a quality attack with defence being suspect. The first goal will be crucial in this game as it will help open up the opposition more.

(The above story first appeared on LatestLY on Oct 24, 2020 12:26 PM IST. For more news and updates on politics, world, sports, entertainment and lifestyle, log on to our website latestly.com).