Bologna vs Juventus, Serie A 2019–20 Free Live Streaming Online & Match Time in Indian Time: How to Get Live Telecast of BOL vs JUV on TV & Football Score Updates in IST 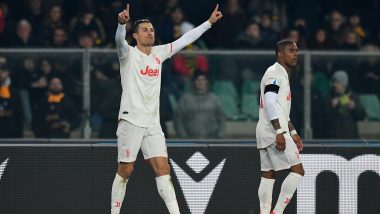 Bologna vs Juventus, Serie A 2019- 20 Online Live Streaming and Live Telecast: Juventus will seek a win when they visit Bologna for their first Serie A 2019-20 match after a three-month halt. The Coppa Italia final defeat has put the tables leaders under enormous pressure. The champions have a one-point lead over second-placed Lazio and the kind of competition we are seeing in Italy this season was certainly unprecented. A win will ease the nerves of Juventus’ players who are a bit short of confidence at the moment. 10th placed Bologna come into the contest on the back of two defeats in the last three league games. Paulo Dybala Admits Playing Football Without Public is Boring, Questions Social Distancing Rules as They are Already Being Violated.

Mattia Bani, Jerdy Schouten and Federico Santander are suspended for the contest after picking up yellow cards in Bologna’s last game against Lazio. Andreas Skov Olsen is out injured and his absence will be felt in the home team’s attack. The temperamental Gary Medel’s presence in midfield is a boost for Bologna with his ability to sense danger. He will calm things in the middle and also set up counter-attacks, using the pace of Riccardo Orsolini. Rodrigo Palacio is a veteran in the Italian league and could pop up with a goal if afforded space and time.

Cristiano Ronaldo has looked out of sorts since the league resumed post-COVID 19 break which is a cause of worry for Maurizio Sarri. The Portuguese skipper needs to come up with the goods if Juventus are to gather momentum in the title race. Miralem Pjanic will feature in Juventus’ midfield despite rumours linking him with a move to England. Aaron Ramsey looked good coming off the bench against Napoli and will be hoping for a start tonight.

When is Bologna vs Juventus, Serie A 2019-20 Football Match Schedule (Date, Time and Venue Details)?

Bologna vs Juventus match in Serie A will be played on June 23, 2020 (Tuesday) at the Renato Dall'Ara Stadium. The game has a scheduled time of 01:15 am IST

How to Live Telecast of Bologna vs Juventus, Serie A 2019-20 Football Match?

Sony Sports is the official broadcaster of Serie A 2019-20 in India. So fans can catch the live action of Bologna vs Juventus on Sony Ten channels.

Where to Get Free Live Streaming Online of Bologna vs Juventus, Serie A 2019-20 Football Match?

With Sony Sports being the official broadcaster, SonyLiv will be streaming the games online, Fans can log onto SonyLiv.com and SonyLiv App to catch the live action of Bologna vs Juventus. Bologna are a decent side at home but Juventus will have enough about them to merit all three points at the end of 90 minutes.

(The above story first appeared on LatestLY on Jun 22, 2020 11:00 PM IST. For more news and updates on politics, world, sports, entertainment and lifestyle, log on to our website latestly.com).