Paulo Dybala Admits Playing Football Without Public is Boring, Questions Social Distancing Rules as They are Already Being Violated 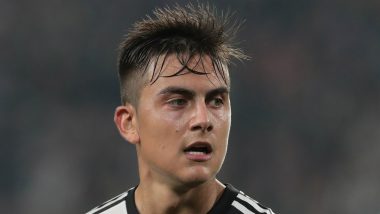 Juventus star Paulo Dybala who was last seen in action during the Coppa Italia 2019-20 finals against  Napoli and will now be making a comeback in the Serie A 2019-20 with the match against Bologna on June 23rd 2020. Now, ahead of the game, Dybala in ana interview has said that playing a match without the fans is boring. The matches are being played behind closed doors due to breaking the chain of the coronavirus. The Argentine has questioned the social distancing norms as he says a lot of them are being violated already. Paulo Dybala Denies the Rumours of Getting Affected by Coronavirus.

Paulo Dybala emphasised that atmosphere matters a lot in football. I think that many rules are being violated, and the truth is that football without people is sad. Without the public, without our fans, playing football is boring, because I think they are part of the atmosphere of this, which is the most important thing in football," he said during the interview.

In the same interview, he spoke vividly about how is it playing alongside Cristiano Ronaldo in Juventus and Lionel Messi at Argentina and said that they are incredible players. While speaking about Ronaldo he said it is always great to learn from footballers like CR7. Whereas while talking about the six-time Ballon d'Or winner he explained that Messi is a natural player and it is quite unbelievable that even at the age of 32, he dribbles so fast. Dybala further said that he shies away from comparing the two football stalwarts.

(The above story first appeared on LatestLY on Jun 21, 2020 09:29 PM IST. For more news and updates on politics, world, sports, entertainment and lifestyle, log on to our website latestly.com).