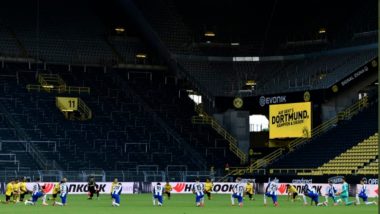 The players of Borussia Dortmund have supported the cause of racial equality. Ahead of their game against Hertha Berlin at Signal Iguana Park, players of Borussia Dortmund were seen donning black tees which flaunted the message of racial equality. Not only this, but both teams knelt on one knee to mourn the death of George Floyde ahead of their game. A few days ago, team Liverpool had knelt on one knee to mourn the death of the man in the USA. For a few days now, the death of George Floyd in the USA has to a massive outrage not only in the country but also in social media. Twitter Supports Black Lives Matter! Changes Bio to #BlackLivesMatter and Logo to Black After George Floyd’s Death That Erupted Protests Across US.

Many sporting stalwarts including Roger Federer, Coco Gauff, Paul Pogba, Lionel Messi, Paulo Dybala and other have spoken against the heinous act and have shown their support to the hashtag BlackLivesMatter, which is running on social media. Now, ahead Bundlesiga 2019-20 game against Hertha Berlin, the hosts were seen wearing black tees with different messages in favour of racial equality. Also ahead of the game, the teams knelt on one knee and the picture of the same was shared on social media.

Borussia Dortmund show their support for racial equality before their game vs. Hertha. pic.twitter.com/wj87rerHp8

Talking about the game, as we talk the home team is on the score of 1-0 as Emre Can netted a goal at the 58th minute of the match. Both the teams broke into an interval with the score of 0-0.

(The above story first appeared on LatestLY on Jun 06, 2020 11:49 PM IST. For more news and updates on politics, world, sports, entertainment and lifestyle, log on to our website latestly.com).