The 34-year old had gotten into a relationship with Camila Angelo, who is the niece of his former wife, after breaking up with the latter a year ago. He took to Instagram to share pictures of him and Camila and announced this news two days ago. 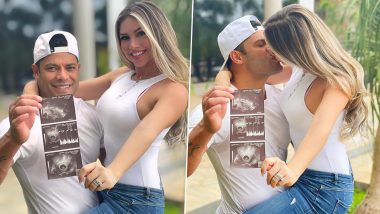 Brazilian footballer Hulk is expecting his fourth child with Camila Angelo, who is the niece of his former wife, Iran Angelo! The 35-year had already started dating Camila after parting ways with Iran a year ago and the couple is expecting their first child. This would be Hulk's fourth overall child. The former Porto star took to Instagram to share this news, as he posted a picture of him holding the ultrasound images alongside Camila. He wrote, "Today with a heart full of gratitude to GOD, I come to share with you that for the fourth time I am being blessed with another child. My heart overflows with so much happiness and I can only say thank you GOD. We are already looking forward to receiving you, child, we love you unconditionally. Come full of health my baby." Lionel Messi Unhappy at Being Substituted During PSG vs Lyon Ligue 1 2021–22 Clash, Refuses Handshake With Manager Mauricio Pochettino (Watch Video)

The striker currently plies his trade for Brazilian club Atlético Mineiro and he memorably celebrated a recent goal of his by putting the ball below his shirt to symbolize his pregnant wife. He was representing Shanghai SIPG in the Chinese Super League when he separated from his ex-wife after 12 years and started dating Camila. While talking about his broken marriage and getting back to a relationship with this former wife's niece, Hulk had said, "Camila came to China. I don’t think I’m an ugly person and I'm young. Camila is young and extremely beautiful. We ended up getting involved. We were single. "

The burly marksman has scored 12 goals for Brazil in a total of 53 appearances. Besides the national side. Hulk is known for his professional career which spanned 17 years in which he has represented clubs like Porto and Zenit Saint Petersburg.

(The above story first appeared on LatestLY on Sep 21, 2021 09:32 AM IST. For more news and updates on politics, world, sports, entertainment and lifestyle, log on to our website latestly.com).