Placed 12th in the Premier League table with six points from four matches, Leicester City have not been in good form of late and they would desperately be on the lookout for a win when they face sixth-faced Brighton. The match is expected to end in a draw. 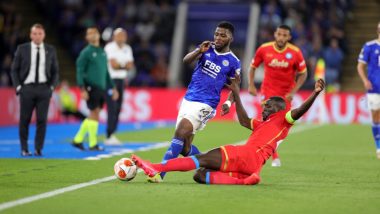 Brighton would take on Leicester City in a Premier League 2021-22 clash at the Amex Stadium on Sunday. The match is scheduled to begin at 6:30 pm IST (Indian Standard Time). The former Premier League champions have had a mixed tournament so far with two wins and two defeats in four matches. After defeating Norwich in the third match, Brendan Rodgers' side fell to a 0-1 defeat to title holders Manchester City. With just six points from four matches, they are currently 12th in the league table and Rodgers would be keen on having his side return to winning ways when they face Brighton in an away game. They would hardly draw any inspiration from their Europa League match against Napoli, where despite having a 2-0 lead, they conceded the same number of goals to have the game end in a tie. The Foxes would depend on their veteran marksman Jamie Vardy to once again inspire his side to a win and Brighton would be wary of the threat he would possess.  Jimmy Greaves, Former England & Tottenham Hotspur Striker Dies at 81

Graham Potters' Brighton on the other hand, would be eager to build on their win against Brentford in the last match and they would not be easy opponents for the Foxes to deal with. The match is expected to end in a draw.

Brighton vs Leicester City match in Premier League 2021-22 will be played at the Amex Stadium in Brighton. The game will be held on September 19, 2021 (Sunday) and the match is scheduled to begin at 06:30 pm IST (Indian Standard Time).

Where to Get Live Telecast of Brighton vs Leicester City, Premier League 2021-22 Football Match?

Fans in India can watch the Brighton vs Leicester City match live on Star Sports channels since Star Network is the official broadcaster for the Premier League 2020-21 in India. Fans can tune into Star Sports Select SD/HD channels to live telecast the clash.

How to Get Free Live Streaming of Brighton vs Leicester City, Premier League 2021-22 Football Match?

The game will also be available online for live streaming. As Star Network is the official broadcaster for Premier League in India, fans can watch the live streaming of the Brighton vs Leicester City match on Disney+Hotstar.

(The above story first appeared on LatestLY on Sep 19, 2021 04:45 PM IST. For more news and updates on politics, world, sports, entertainment and lifestyle, log on to our website latestly.com).