Christian Pulisic Only Behind Cristiano Ronaldo in This List, Becomes Second Youngest Scorer in FA Cup Final History During Arsenal vs Chelsea Clash! 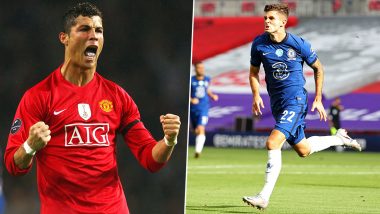 US international Christian Pulisic, whose opener gave Chelsea an inspiring start in the FA Cup 2019-20 final against Arsenal created a few records before limping off due to an apparent hamstring injury in the second half of the game. The former Borussia Dortmund man became the second-youngest scorer in the finals of the prestigious FA Cup competition behind Cristiano Ronaldo with his 5th-minute strike. Arsenal Players Celebrate After Confirming European Football With FA Cup 2019–20 Win Over Chelsea (View Pics).

Cristiano Ronaldo’s header against Millwall had helped the Red Devils secure the trophy back in 2004 but on this instance, Cristian Pulisic’s evening could only end in tears. While the Portuguese skipper was on 19 years and 106 days when he assumed greatness at the Millennium Stadium in Cardiff, signs are looking good for Cristian Pulisic who managed to score at 21 years and 318 days. Mikel Arteta After Winning FA Cup 2020 Says 'So Proud to Have Player Like Pierre-Emerick Aubameyang in Squad'.

Chelsea started off in fine fashion against Arsenal as they harrowed the Gunners’ defence with some exquisite passing. Cristian Pulisic was heavily involved in the early build up as he and Mateo Kovavic ran the show. But a momentary lapse of concentration from Cesar Azpilicueta allowed Pierre Emerick Aubameyang in and led to a penalty.

Fare to say, nothing went Chelsea’s way from this points onwards as they kept losing men to injuries one after another. Controversial decisions from referee Anthony Taylor did not help either as they crashed to a 2-1 defeat.

Despite the defeat, Cristian Pulisic can be a proud man as in addition to the youngest scorer record, he also became the third US international to participate in the event since John Harkes in 1993 and Tim Howard in 2004 and 2007. His goal is also the second-fastest in FA Cup history for Chelsea, second only to Roberto Di Matteo finding the back of the net with less than a minute on the clock against Middlesbrough in 1997.

(The above story first appeared on LatestLY on Aug 02, 2020 11:44 AM IST. For more news and updates on politics, world, sports, entertainment and lifestyle, log on to our website latestly.com).