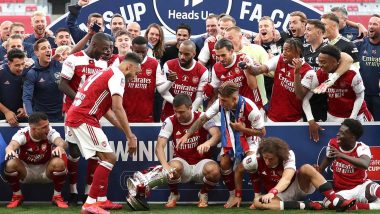 Arsenal guaranteed themselves yet another season in Europe after their FA Cup 2019-20 final win over Chelsea on Saturday (August 1, 2020) at the Wembley Stadium. It has been a difficult campaign for the Gunners, which has seen them appoint three managers over the course of 12 months. But after an unusual season – both on and off the field – the North London club finished on a high with a trophy in their cabinet and European football for next season. Which Teams From EPL Will Qualify for Champions League and Europa League Next Season?.

Mikel Arteta took over the Gunners in December following the sacking of Unai Emery and an interim spell by Freddie Ljungberg. The only expectation Arsenal had from the young Spanish manager was European football and he delivered, though by taking a scenic route. Pedro Rodriguez Dislocates Shoulder During FA Cup Final Defeat to Arsenal, Chelsea Fans Blame Referee Anthony Taylor.

Arsenal had a dismal league camping, which saw them end the league camping on eights spot in the Premier League standings, their worst finish since the 1995-96 season. Due to this, their European qualification dreams relied heavily on the result of the FA Cup final.

Mikel Arteta’s team defeated Chelsea in the finals thanks to a brace from captain and star striker Pierre-Emerick Aubameyang. This win means that the Gunners will take the automatic qualification spot for the Europa League next season – offered to FA Cup winners – and will take their place in the group stages.

Arsenal had to endure a lot of criticism over the course of the season and it was not surprising that the players wildly celebrated the 14th FA Cup title in the club's history.

Scenes in the dressing room 🙌🏆

However, this result has ramifications on the other teams in the Premier League. Tottenham Hotspur, who finished sixth in the league, will now give up their automatic place in Europa League group stages and will have to qualify through the qualifications rounds.

Meanwhile, Wolves, who finished seventh in the league, for the time being, have not qualified for any European competitions next season. However, Nuno’s men are still, in Europa League this season and winning the competition will bump them into Champions League for next season. Pushing Spurs out of Europe and Arsenal into the second qualification round of UEL.

(The above story first appeared on LatestLY on Aug 02, 2020 10:21 AM IST. For more news and updates on politics, world, sports, entertainment and lifestyle, log on to our website latestly.com).