Cristiano Ronaldo Birthday Special: Most UCL Goals and Other Records Held by CR7

Born in Madeira, Portugal, Cristiano Ronaldo came through the ranks of Sporting CP before playing for the likes of Manchester United, Real Madrid and Juventus. Despite being in the late 30s, the Juventus star has continued to be amongst the best players in the world and is still making and breaking records on regular occasions. 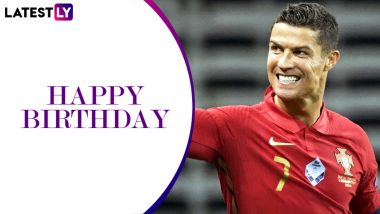 One of the greatest football players of his generation, Cristiano Ronaldo celebrates his 36th birthday on February 5, 2021 (Friday). Despite being in the late 30s, the Juventus star has continued to be amongst the best players in the world and is still making and breaking records on regular occasions. So as Cristiano Ronaldo turns a year older, we take a look at some of the best records held by the Portuguese star. Real Madrid Congratulates Cristiano Ronaldo After Juventus Star Becomes The Highest Goal-Scorer in History of Football.

Born in Madeira, Portugal, Cristiano Ronaldo came through the ranks of Sporting CP before playing for the first team which saw him earn a move to English giants Manchester United. It was over there, the young winger came into the conversation of one of the best footballers, winning his first Ballon d’Or. But it was his time at Real Madrid which saw him become a prolific goal-scorer, averaging more than a goal-a-game for the club.

During his nine-year stay in Madrid, Ronaldo won many individual and team accolades, including four Ballon d’Or honours. The Portuguese then in search of a new challenge, joined Juventus in 2018 and continued to create history, scoring goals at will for the Italian giants. So as the Portuguese celebrate his birthday, we take a look at his football records.

Cristiano Ronaldo is the top-scorer in the history of the UEFA Champions League. Playing for Sporting CP, Manchester United, Real Madrid, Juventus, the Portuguese star has scored 134 goals in the competition.

Cristiano Ronaldo is the leading scorer in the history of Real Madrid. The Portuguese national team captain has scored 450 goals for the Spanish giants in 438 appearances with an average of 1.03 goals per game.

The Juventus star is the top scorer in the history of Portugal. Cristiano Ronaldo has scored 102 goals for his national team in 170 games, which is more than twice the amount of strikes his nearest competitor has managed.

Goals in Every Minute of Football Match

Cristiano Ronaldo is a prolific goal-scorer but what makes him even better is the stat of scoring in every minute of a football match. The Portuguese star shares this amazing feat with only Zlatan Ibrahimovic.

The Portuguese star leads the chart in most Ballon d’Or win by a European footballer. Cristiano Ronaldo has won the best player award five times (2008, 2013, 2014, 2016, 2017) in his career and is only behind rivals Lionel Messi, who has won it six times.

Most Official Goals in Football

Cristiano Ronaldo after his brace against Inter Milan on February 2, 2021, became the leading scorer in football. The Portuguese netted his 763rd official goal in the sport (club and country) going past the tally of Josef Bican and Pele, who has scored 762 goals each.

(The above story first appeared on LatestLY on Feb 04, 2021 12:11 PM IST. For more news and updates on politics, world, sports, entertainment and lifestyle, log on to our website latestly.com).