Georgina, 26, shared the picture of her and Ronaldo posing for a pic with the Juventus footballer covering her ring finger. In the picture, the couple can be seen holding each other with Ronaldo placing his one hand on Georgina’s right wrist to cover her fingers. Cristiano Ronaldo too shared the same picture but with an interesting caption. 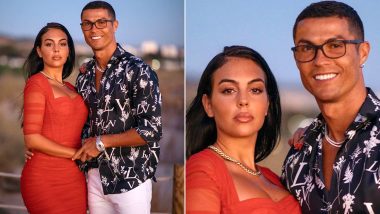 Cristiano Ronaldo and girlfriend Georgina Rodriguez have sparked rumours of their marriage after sharing identical posts on social media. The couple, who are on a holiday in their luxurious £5.5million yacht along the French Rivera with their four children, posted cryptic messages on Instagram leading to their fans speculating if the couple is finally getting married after four years of courting each other. Both Ronaldo and Georgina shared the same picture with almost identical messages for each other leading to reports that they are engaged and will soon get married. Cristiano Ronaldo and Girlfriend Georgina Rodriguez Celebrate ‘Special Occasion’ With Romantic Dinner; Spanish Model Looks Stunning in Blue Dress (See Pic).

Georgina, 26, shared the picture of her and Ronaldo posing for a pic with the Juventus footballer covering her ring finger. In the picture, the couple can be seen holding each other with Ronaldo placing his one hand on Georgina’s right wrist to cover her fingers. The Spanish model shared the picture with the caption “YESSS” and a Red Rose emoji. Cristiano Ronaldo Kissing Georgina Rodriguez In These New Pics of Hot Couple Amid PSG Transfer Rumours Is Breaking Internet Today (See Pics).

Ronaldo too took to Instagram to share the same picture. He captioned the lovely image as “Mi amor”, a Spanish word which translates to “My Love” in English. Ronaldo also used a love emoji to caption the picture. In the image, Georgina can be seen wearing a scarlet dress with a sweetheart neckline. She looks gorgeous as she accompanied the dress with a golden chain necklace and untied hair. Ronaldo is wearing a navy printed Louis Vuitton shirt with ivory trousers. In the picture, the couple stands with their arms wrapped around each other.

Georgina and Ronaldo are currently on a holiday with Ronaldo’s four children. The couple has been spending their time in the superyacht and have shared regular updates, including some lovely pictures of each other and with the children, from their holiday. The couple met in 206 and reportedly it was a first sight love for each other. They have been in a relationship for the last four years.

(The above story first appeared on LatestLY on Aug 23, 2020 10:20 AM IST. For more news and updates on politics, world, sports, entertainment and lifestyle, log on to our website latestly.com).