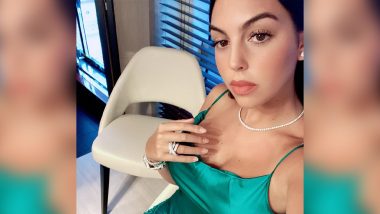 Cristiano Ronaldo’s partner Georgina Rodriguez looked stunning in a blue dress in a picture she posted on Instagram. Georgina and Ronaldo were spotted enjoying candle dinner with their friends in Italy on Monday. The couple have been enjoying their short holiday in Portofino before Ronaldo returns to the Juventus squad for their Champions League clash against Lyon on August 7. Georgina even posted a picture from the romantic dinner flaunting her dress and jewellery. She called the date a special occasion that needed to be celebrated. Bugatti La Voiture Noire Facts: All Things to Know About the World’s Most Expensive Car Purchased by Cristiano Ronaldo.

Georgina looked lovely in a tight blue dress with a necklace around her neck in the picture. “There are as many special occasions in life as there are times we choose to celebrate them,” she captioned the photo. Many fans and followers of the 26-year-old model commented on the picture and praised her beauty and gorgeous look. Cristiano Ronaldo, Partner Georgina Rodriguez Relax on a Luxury Yacht During Vacation in Portofino (View Family Pics).

Ronaldo and Georgina are currently in a short vacation and have been enjoying their time in the Juventus star’s luxury yacht near the small village of Portofino. The couple, on Monday, were pictured dining with a couple of friends at the "La Langosteria”. British tabloid The Sun reported that fellow Portuguese star Jose Semedo were among Ronaldo’s friends who were at the dinner.

Georgina, meanwhile, recently has been having the best time of her life with Ronaldo in the yacht. The Spanish beauty model shared some stunning pictures from the yacht in which she could be seen soaking up the sun in a purple bikini. In the picture, she is lying on a diving board facing the Mediterranean Sea and looks ravishing.

Georgina Rodriguez Soaks Up the Sun

Ronaldo too has been enjoying his time after guiding Juventus to a ninth successive Serie A title. The Portuguese star scored 31 goals in 36 games and finished as the second-highest goalscorer in Serie A 2019-20 helping Juventus win the championship. To celebrate the record win, Ronaldo gifted himself a luxurious Bugatti La Voiture Noire car.

(The above story first appeared on LatestLY on Aug 04, 2020 05:52 PM IST. For more news and updates on politics, world, sports, entertainment and lifestyle, log on to our website latestly.com).