Cristiano Ronaldo Named GOAT by a Student During French Exams, Fails the Test! 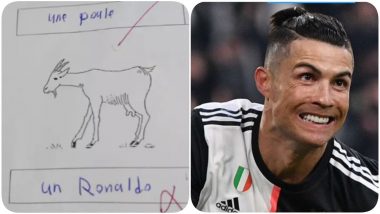 Cristiano Ronaldo never fails to make an impact on young minds. Here’s another example of the same. So this student who seems to be an ardent fan of the Juventus star appeared for his French exams and had to write the name of the animal in French under a blank space given below the picture. Ths student named Ahmed Nabil, who has a bent in football decided to answer the paper keeping in mind the theme of the sport. Little did he know that his grade would affect so drastically that he would flunk in the exams. Cristiano Ronaldo Funny Memes Go Viral After Juventus Striker Lags Behind Ciro Immobile in Race to Win Golden Boot!

Under the picture of GOAT,  Nabil answered, "Un Ronaldo." He continued with his football-themed answers and even named Mesut Ozil in one of the blanks. After flunking the exams, the youngster shared the picture of the same on social media. The tweet was posted last year in 2019, but is still making a round of the social media. Check out the same below:

Failed my french test, but it's totally unfair. pic.twitter.com/Kkdzp7BiXB

While speaking about the tests, the student said that it was quite a difficult exam for him and instead of leaving the spaces blank, he wanted to fill it up with something funny. When asked to pick the GOAT, Nabil sounded confused and said, "If anyone asks me who I think is the goat is, I'll tell him them Ronaldo but deep down I'm not that sure. Sometimes I think that Messi is better but because of my bias, the former United player is the greatest." We are sure the answers of this kid made your day.

(The above story first appeared on LatestLY on Jul 30, 2020 02:44 PM IST. For more news and updates on politics, world, sports, entertainment and lifestyle, log on to our website latestly.com).