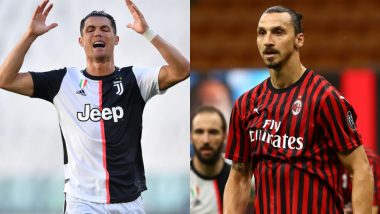 Italian Serie A at the moment boasts of the presence of two of the best players in world football at the moment – Zlatan Ibrahimovic and Cristiano Ronaldo. Both these superstars may be on the wrong side of the thirties, but when it comes to dazzling on the pitch, few can come close to them. The duo was in action last night as Cristiano Ronaldo’s Juventus played Zlatan Ibrahimovic’s AC Milan. It was the former Swedish skipper who got the better of the Portuguese captain in this pulsating game which has somewhat halted Bianconeri’s title charge. Cristiano Ronaldo Nets 30th Goal of the Season in Juventus' 2-4 Loss Against AC Milan..

Cristiano Ronaldo was on the score sheet as Juventus were cruising with a 2-0 lead at the San Siro but a crazy five minutes of football turned the game on its head. It started with Ibrahimovic scoring from a penalty with Franck Kessie and Rafael Leao following the suit. Ante Rebic sealed the deal for the hosts with a goal in 80th minute and pushed them to fifth in the league. Cristiano Ronaldo and Co. failed to create any clear opening in the last ten minutes of the game, which was frustrating for their fans to watch. For Juventus, courtesy the defeat, blew away the chance to go ten points clear at the top and they must regroup quickly. Cristiano Ronaldo Nets 30th Goal of the Season in Juventus' 2-4 Loss Against AC Milan in Serie A 2019-20.

Cristiano Ronaldo and Zlatan Ibrahimovic famously met in the 2014 World Cup qualifier play-off where the former scored a hat-trick to help Portugal qualify at the expense of Sweden. Both the players are known for their no-nonsense attitude and a desire for success that sees them produce tremendous work-rate. On that day, in 2013, Cristiano Ronaldo put Zlatan Ibrahimovic in the backdrop with some out of the world finishing.

As Zlatan Ibrahimovic enters the final few months of his AC Milan contract, this could very well have been the last time we saw the two giants of football clash on the pitch. But the quality of the game has made sure it will be remembered for years.

(The above story first appeared on LatestLY on Jul 08, 2020 12:51 PM IST. For more news and updates on politics, world, sports, entertainment and lifestyle, log on to our website latestly.com).