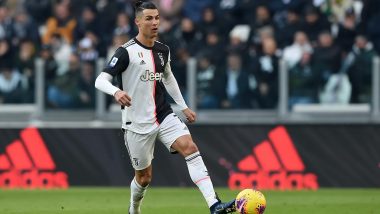 Juventus might have had a forgettable outing against AC Milan in their last Serie A 2019-20 encounter as they lost the game by 4-2. However, Cristiano Ronaldo added another feather to his already illustrious hat as he completed 30 goals in the ongoing season. The Portugal star struck the nets in the 53rd minute of the game courtesy a mix-up in defence from Milan players and achieved the feat. This is also the 10th time in the last 11 seasons that the ace striker has reached the tally of 30 goals. AC Milan Register Three Goals in Five Minutes to Outclass Juventus.

In the current season, Ronaldo has scored 26 goals in Serie A and two goals apiece in Champions League in Coppa Italia. Overall, he just took 39 games to achieve the landmark. Well, these numbers speak volumes of Ronaldo’s capabilities and he’ll aim to add more to his tally in the running season. Ronaldo brilliance lies with his skill off the ball through which he has breached many defences. His best show was witnessed in the 2015-16 season when he struck 62 goals in 64 matches. Cristiano Ronaldo vs Zlatan Ibrahimovic Rivalry Resumes.

Speaking of Juventus’ recent meeting against AC Milan, the visitors were well on command as Adrien Rabiot scored the first goal of the match in 47th minute and soon Ronaldo also joined the action as the scorecard read 2-0. However, Milan made an astonishing comeback in the second half of the game and took the table-toppers by storm. Zlatan Ibrahimovic opened his side’s account in the 62nd minute and soon followed by Franck Kessié, Rafael Leao and Ante Rebic.

Despite the emphatic loss, however, Juventus remained at the pinnacle of the team standings and are the frontrunner to lift the Serie A title for the ninth straight time. On the other hand, Milan are placed at the fifth position with 49 points.

(The above story first appeared on LatestLY on Jul 08, 2020 12:22 PM IST. For more news and updates on politics, world, sports, entertainment and lifestyle, log on to our website latestly.com).