Lionel Messi's goal was compared to Cristiano Ronaldo, who has scored multiple such strikes in his career and the Portuguese star's sister, Katia Aveiro, was not impressed. 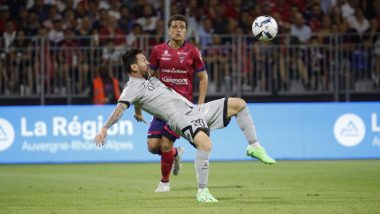 Lionel Messi was sensational in the Parisians Ligue 1 opener as he assisted a goal and scored twice, which included a bicycle kick attempt. However, the 35-year-old's overhead goal has drawn comparisons to similar strikes from Cristiano Ronaldo and the Portuguese star's sister has commented on a post trolling the Argentine's strike. Clermont Foot 0-5 PSG, Ligue 1: Lionel Messi, Neymar Shine in Parisian's Dominant Win.

Lionel Messi has made a great start to the 2022-23 season, scoring three times in PSG's both official games so far. However, his best strike came on the weekend in a 5-0 Ligue 1 win over Clermont Foot. The Argentine controlled the ball on his chest before scoring with a bicycle kick.

It was one of the more athletic goals the Argentine has scored in his career. His strike event impressed the Clermont fans as the chants of 'Messi, Messi' rung around the Gabriel Montpied Stadium.

Once again this goal was compared to Cristiano Ronaldo, who has scored multiple such strikes in his career and the Portuguese star's sister, Katia Aveiro, was not impressed.

A Cristiano Ronaldo fan page on Instagram trolled Lionel Messi while comparing his goal to the Portuguese star's overhead kick against Juventus. Katia Aveiro agreed with it and liked the post before commenting with a number of clapping emojis.

Should we even be surprised anymore? This family is so obsessed pic.twitter.com/XVErjEg5GV

Both the superstars shared an intense rivalry during their Barcelona and Real Madrid days as they competed for the same trophies. However, the two have not played in the same league since 2018 but are yet compared to one another by their fans.

(The above story first appeared on LatestLY on Aug 10, 2022 10:57 AM IST. For more news and updates on politics, world, sports, entertainment and lifestyle, log on to our website latestly.com).