A win for Liverpool would help them reduce the 12-point gap they have with Premier League leaders and defending champions Manchester City. Crystal Palace, on the other hand, would need a victory to make their way into the top 10 on the points table. 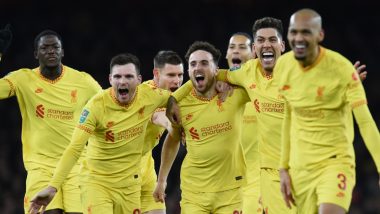 Liverpool would return to action in the Premier League when they face Crystal Palace in a match on Sunday, January 23. The game would be played at the Selhurst Park Stadium and is set to start at 7:30 pm IST (Indian Standard Time). Jurgen Klopp's Liverpool have been a strong outfit this season with just two defeats so far in 21 matches. But what has really been a problem for them is the number of times they have failed to win all points on offer from the game. They have had six draws so far, as compared to Manchester City (3).  Klopp would expect his side to show up and secure all three points against Crystal Palace, who are 13th on the Premier League points table. Manchester United vs West Ham Result and Goal Highlights: Marcus Rashford’s Late Strike Seals Victory for Red Devils at Old Trafford

The Reds have a good head-to-head record against Crystal Palace with 34 wins in 59 games. They have also won their last five games against the Eagles. A victory over Arsenal in the Carabao Cup 2021-22 semi-final second leg would give Liverpool a world of confidence ahead of this clash. Let us take a look at the live streaming details of this game.

The Crystal Palace vs Liverpool Premier League 2021-22 match will be played at Selhurst Park Stadium in London. The football game will be held on January 23, 2022 (Sunday) and is scheduled to begin at 7:30 pm IST (Indian Standard Time).

Where to Get Live Telecast of Crystal Palace vs Liverpool, Premier League 2021-22 Football Match?

Fans in India can watch the Crystal Palace vs Liverpool match live on Star Sports channels since Star Network is the official broadcaster for the Premier League 2020-21 in India. Fans can tune into Star Sports Select SD/HD channels to watch live telecast the clash.

How to Get Free Live Streaming of Crystal Palace vs Liverpool, Premier League 2021-22 Football Match?

(The above story first appeared on LatestLY on Jan 23, 2022 06:19 PM IST. For more news and updates on politics, world, sports, entertainment and lifestyle, log on to our website latestly.com).