David Beckham Posts a Picture With His Kids on Global Day of Parents, Says ‘Being Parents Means Showing Strength’ 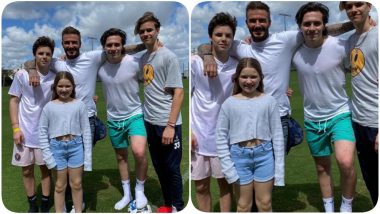 It is Global Parents day today and David Beckham has posted a picture of himself with all his four kids.  In the snap we see the former Manchester United player was seen posing with kids Brooklyn, Harper Seven, Romeo James and Cruz Beckham and all the five donned smiles as they posed for a photograph. He further shared the snaps of different kinds of parents around the world and in the caption of the pictures, he said that being a parent means showing strength and love in times like these. Sachin Tendulkar Gets Nostalgic on Global Parents Day, Shares a Rare Black & White Photo With his Parents.

Today is Global Day of Parents. As a father of four I know that being a parent means you have to show strength, love, care and patience all at once and especially during this time. Today I’m thinking of all the different types of parents out there doing their best, happy Global Day of Parents. #EarlyMomentsMatter @UNICEF

A while ago, even Sachin Tendulkar had posted a snap on social media where he shared a picture of himself with his parents. He emphasised on how his parents played a vital role in drafting his career.

(The above story first appeared on LatestLY on Jun 01, 2020 10:05 PM IST. For more news and updates on politics, world, sports, entertainment and lifestyle, log on to our website latestly.com).