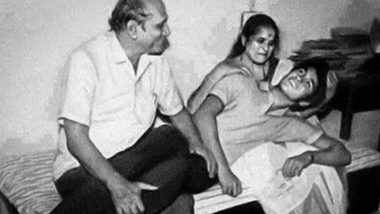 When most of the kids were still crossing the fences of the school, Sachin Tendulkar was already taking on the mighty pacers from all over the world. Very often have we heard the Master Blaster talking about the contribution of his parents to his career. Now, on Global Parents Day, the Master Blaster walked down the memory lane and shared a rare photo along with his parents. In the snap, Tendulkar was seen resting in the lap of mother Rajni and had placed his legs on his father’s lap. Sachin Tendulkar's Life in Pictures: Unseen Childhood, Teenage and Family Pics to Treasure.

His father Ramesh Tendulkar held his son tight and all three were smiles for the candid snap. The netizens were also quite elated seeing the snap. Along with the picture, Tendulkar even posted an emotional message and said that it was their unconditional love and support that has led to his growth."In my life too, the support and guidance from my parents helped me become the person I am today," read the caption of the long post. You can see the picture here.

The unconditional love, support and attention that our parents showered on us as we were growing up laid our foundation as individuals. In my life too, the support and guidance from my parents helped me become the person I am today. In these challenging times, our parents need us more than ever. It’s our responsibility to take care of them & even more so now during these tough times. ‪#globaldayofparents

We all remember Sachin Tendulkar's retirement speech where he spoke about his parents and said that they had given him complete freedom for making his career choices. "He had given me total freedom, but at the same time he was very much bothered about what’s going to happen to my future," he had said during the interview.

(The above story first appeared on LatestLY on Jun 01, 2020 06:04 PM IST. For more news and updates on politics, world, sports, entertainment and lifestyle, log on to our website latestly.com).