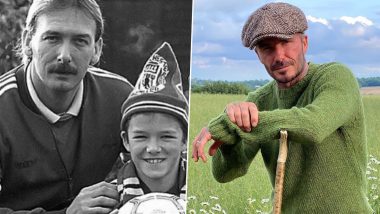 David Beckham posted a throwback picture to wish his dad a very happy Father’s Day. Beckham, who himself is a father of four, shared a photo of himself smiling next to his father Ted on Instagram and wished his father on this special occasion. Father’s Day is celebrated on the third Sunday of June every year. This year June 21 (Sunday) is being celebrated as the Father’s Day and everyone has been paying tribute and recalling special moments with their fathers. Beckham too wished his father on this special day and thanked the latter for giving him the drive and ethic to succeed. Father’s Day 2020: Lionel Messi’s Photos With His Sons Thiago, Ciro and Mateo That Tells You Why He Is One of Sporting World’s Coolest Dads.

In a moving Instagram post, Beckham paid homage to his father and shared a throwback picture of both together. In the picture, Beckham can be seen wearing a beanie hat of boyhood club Manchester United. “Happy Father’s Day dad x love you. thank you for giving me the drive and work ethic to succeed,” wrote the 45-year-old football superstar in his Instagram post. Father’s Day 2020 Wishes: Sachin Tendulkar, Rohit Sharma, Hardik Pandya and Others From Sports Fraternity Share Memorable Moments With Their Dads.

The former Manchester United, Real Madrid and Paris Saint-Germain footballer also wished fathers around the world on this auspicious day. In a post, the 45-year-old wrote how working with UNICEF has given him the opportunity to know many dads and fatherly figures around the world and how they have inspired him with their stories.

Happy Father’s Day to all the dads and father figures out there. Working with @UNICEF has given me the opportunity to meet dads and their children from all around the world. This has been a challenging time for everyone and we all need to show a lot of love and strength to keep our kids safe and happy. Our normal lives might be on hold but the time we spend together now is giving us the chance to bond and make the #EarlyMomentsMatter. From my family to yours, have a great Father’s Day.

Beckham started his football journey with Manchester United after joining the club academy as a trainee at the age of 8. His parents Ted and Sandra were fanatical United supporters and often travelled from London to Old Trafford to watch their beloved team play. Beckham graduated from the academy in 1992 and went on to play for the Red Devils 11 years during which he won six Premier League titles, two FA Cups and a Champions League title.

(The above story first appeared on LatestLY on Jun 21, 2020 07:30 PM IST. For more news and updates on politics, world, sports, entertainment and lifestyle, log on to our website latestly.com).