Euro 2020: From Cristiano Ronaldo to Luka Modric, 5 Players Who Could be Making Last Appearance at UEFA European Football Championship

Some of the most iconic names have graced this tournament. These names have multiple championships experience under their belt, and some have also been lucky to lift the trophy. With not much time left for the Euro 2020 to begin, we take a look at some of Europe’s finest footballing talent that are likely to feature one last time in the competition. 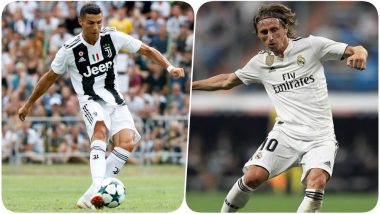 Europe has always been the powerhouse of world football, and that makes the European Championships a quadrennial footballing extravaganza that dishes out one entertaining game after another. Some of the most iconic names have graced this tournament over the years and have added to its glory. These names have multiple championships experience under their belt, and some have also been lucky to lift the trophy. With not much time left for the Euro 2020 to begin, we take a look at some of Europe’s finest footballing talent that are likely to feature one last time in the competition. Euro 2020: Cristiano Ronaldo, Marcus Rashford And Other Biggies to Watch Out for in UEFA European Football Championship.

Cristiano Ronaldo: Portuguese skipper Cristiano Ronaldo burst onto the footballing scene with a wonderful performance in the 2004 edition. His displays saw his nation reach the finals, where it unexpectedly lost to Greece. The legendry player did not lose hope and went on to captain his side to glory in the 2016 European championships. Fiver years later, the Juventus forward is all set to feature one last time at the Euros – a competition he is the joined top scorer in.

Sergio Ramos: Real Madrid and Spanish skipper Sergio Ramos is 35, and the Euro 2020 is most likely his last in Spanish colours. The iconic defender has been one of the greats of the game, and his partnership with Gerard Pique was one of the reasons for Spain lifting the 2012 European Cup. Now in the twilight of his career and a season plagued by injuries, Sergio Ramos will lead a young Spanish team to try and bring back the glory days. Euro 2020 or Euro 2021? Here’s What UEFA has to Say About Tournament’s Name After it Was Postponed Due to COVID-19.

Gareth Bale: Wales captain Gareth Bale’s name on the list may surprise a few but given his poor fitness standards, this might just be his last with his nation. Currently serving a loan spell at Tottenham Hotspur, where he has shown the odd flashes of brilliance, Bale has been boosting his fitness ahead of a gruelling campaign at the Euros. UEFA Euro 2020: Zlatan Ibrahimovic, Erling Haaland and Other Top Players Who Won’t be Part of This Year’s European Championship.

Giorgio Chiellini: Veteran Italian defender Giorgio Chiellini will lead the team at the Euros, and the 2006 World Cup winner with over 100 caps for Italy just might call it time on his international career post the cup. His textbook style of defending has won him a lot of admirers over the years, and although his pace may have declined, he still packs a punch in man-marking.

Luka Modric: He may be 35 but Luka Modric is a bundle of energy on the pitch where he continues to dominate play as a box to box midfielder. His range of passing is second to none, and it is these qualities that have made him Croatia’s most capped player. In all fairness, though, the Euro 2020 is the last time we see Luka Modric in Croatian colours at these championships.

(The above story first appeared on LatestLY on May 21, 2021 08:49 PM IST. For more news and updates on politics, world, sports, entertainment and lifestyle, log on to our website latestly.com).