Euro 2020: Cristiano Ronaldo, Marcus Rashford And Other Biggies to Watch Out for in UEFA European Football Championship

Ahead of the start of this month-long footballing festival, Euro 2020, we come up with five of the biggest names that will generate the most fan frenzy. Although the fans are not allowed in full capacity in the stadiums due to the current pandemic situation, the buzz this tournament is generating is electrifying. 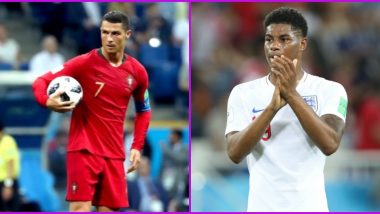 The delayed Euro 2020 is fast approaching with the qualified nations slated to announce their preliminary squad soon. The tournament starts on June 11 and features 24 teams with the games to be played in eleven cities across Europe. Football in Europe is generally considered the highest tier, featuring some of the biggest names in the game. Although the fans are not allowed in full capacity in the stadiums due to the current pandemic situation, the buzz this tournament is generating is electrifying. Ahead of the start of this month-long footballing festival, we come up with five of the biggest names that will generate the most fan frenzy. UEFA Euro 2020: Zlatan Ibrahimovic, Erling Haaland and Other Top Players Who Won’t be Part of This Year’s European Championship.

Cristiano Ronaldo – Portugal: The joint-leading goal scorer in the history of the tournament, Portuguese skipper Cristiano Ronaldo lifted the trophy back in 2016. He has not had the best of seasons with Juventus but remains a talisman for Portugal. With the defending champions boasting of a good squad, Ronaldo will be eager to win back-to-back European Championships.

Thomas Muller – Germany: It was a surprise for many when Joachim Loew recalled Thomas Muller for the European Championships. The veteran forward has been there done that on many occasions for the Die Mannschaft, but a poor 2018 World Cup saw him lose his place in the squad. He may not start games for Germany at the main event, but his presence in the squad brings an added dimension in attack. Euro 2020 or Euro 2021? Here’s What UEFA has to Say About Tournament’s Name After it Was Postponed Due to COVID-19.

Marcus Rashford – England: The Manchester United winger is a crucial player for England, and the Euro 2020 represents an ideal opportunity for him to step it up in England colours. Despite his relatively young age, he has tonnes of experience under his belt that could benefit the Three Lions. Although there is competition for places in England, Marcus Rashford at the moment is a clear starter.

Sergio Ramos – Spain: Like Cristiano Ronaldo, Real Madrid superstar Sergio Ramos might be playing his last European Championship. A fantastic servant for club and country, a much-changed Spanish side under manager Luis Enrique will look up to the centre-back to drive the team to glory. Injuries have hampered his progress this season but once he puts his injuries behind him, Sergio Ramos can be the rock in defence for Spain. UEFA Euro 2020 Anthem: Official Song of the Tournament, We Are The People, by DJ Martin Garrix Featuring Bono and The Edge Released (Watch Video).

Gianluigi Donnarumma – Italy: At 22 years of age, Gianluigi Donnarumma has played 233 times for Italian side AC Milan. His strong reflexes between the sticks and ability to dominate in the air makes him one of the best, if not the best goalkeeper in the competition. Italy are in a period of transition, and it is an ideal opportunity for the youngster to announce his arrival on the international stage.

These five names will have a lot riding on their shoulders, but there are plenty of other picks as well who would engage the fans in what is set to be a mega footballing event.

(The above story first appeared on LatestLY on May 20, 2021 08:16 PM IST. For more news and updates on politics, world, sports, entertainment and lifestyle, log on to our website latestly.com).