From Failing to Qualify for 2018 World Cup to Winning Euro 2020, Here’s How Italy Wrote Their Comeback Story

Italy had failed to qualify for the 2018 World Cup and everything looked bleak for the country's future in football at that time. Five years later, they are at the top of the mountain with the Euro 2020 title win. Here is how they came to becoming world beaters once again. 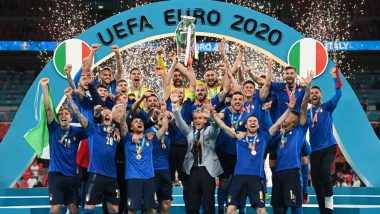 They couldn't back the tears of joy when the full-time whistle was blown at the Wembley Stadium on Monday. Five years ago, Italy players and their fans had cried too but it was out of disappointment, sadness and failure. Now, their redemption story was complete. Italians were once again the champions of Europe and they gained that status of being a world-beater that they were once known to be. So how did it all happen?  It was a dark time in Italian football in 2017 after they had failed to make the cut for the 2018 World Cup in Russia, missing out on the top global competition for the first time in 60 years. They lost to Sweden in the play-offs and the glory days was all but over, in Italian football. Fans and most importantly, the players had lost faith in the team and themselves. So much so that Giorgio Chielleni, one of Italy's best players in their Euro 2020 title win, had announced retirement right after the match. Gianluigi Buffon too, one of the stalwarts in the team too declared that his time for the Azzurri is over. Coach Gian Piero Ventura was sacked. There was nothing much left of Italian football to speak of back then. Leonardo Bonucci Sips Coca-Cola & Beer In Press Conference After Italy Wins Euro 2020, Says ‘I'll Drink Everything Tonight’ (Watch Video)

But history has witnessed such comebacks before also. France didn't make it to the 1994 World Cup and went on to win the 1998 edition. Netherlands had missed out on the 1986 World Cup but went on to win the Euro two years later. So a comeback for Italian wasn't completely ruled out. And Roberto Mancini showed just how it was done.  Italy traditionally were a defensive team but the former Manchester City manager brought about a change in that style. With the defense retaining core players like Chielleni (who reversed his retirement) and Leonardo Bonnucci along with a young, but resolute Gianluigi Donnarumma at the back, he strengthened the midfield and introduced pacy wing backs, who would run through the flank and cut open opposition defenses. Additionally, he had the services of quality strikers like Ciro Immobile and Lorenzo Insigne at his disposal and he put all of the pieces together and slowly, he went on to build an absolute winning machine.

The results speak for him. Mancini's Italy are currently unbeaten for 34 matches, with their last defeat coming against former European champions Portugal, back in 2018. Since then, they are yet to lose a match and Mancini's men deserve all the credit for it. With just one more win, they would be equalling Brazil and Spain's unbeaten international streaks of 35 matches.

Not just results but Italy under Mancini, has learnt to play like a team. They don't rely on any one individual performer but function as well-oiled machine, with players excelling in every department. They conceded just three goals, scored 12 and had atleast five players, who scored more than one goal in Euro 2020. Euro 2020: From Golden Boot to Star of the Final, Here’s the List of Winners at the European Championships

More importantly, the team has started to believe again. Belief in themselves, faith in Mancini's project and passion for the badge. They now have a winning mentality, that kept them going even after conceding a very early goal against England in the final. They didn't give up, pushed hard for an equaliser and got one when Bonnucci scored one in the 67th minute. The celebrations spoke of how they felt as a team. Eventually, they ended up claiming the win, bagging the Euro 2020 title and becoming the kings of Europe once again. They have once again brought back their glory days. Italy's journey of redemption was now complete.

(The above story first appeared on LatestLY on Jul 13, 2021 09:53 PM IST. For more news and updates on politics, world, sports, entertainment and lifestyle, log on to our website latestly.com).