Euro 2020: From Golden Boot to Star of the Final, Here’s the List of Winners at the European Championships

Euro 2020 witnessed a lot of players impress with their performances in the national jersey. From Cristiano Ronaldo to Leonardo Bonnucci, here is a list of players who walked away with awards for their efforts in the competition. 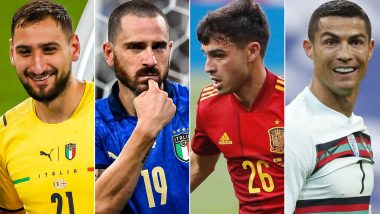 After a month of exhilarating football, intense competition and memorable moments, Euro 2020 has come to an end with Italy lifting the title, after a gap of 53 long years. They defeated Gareth Southgate's England 3-2 on penalties to lift the title and claim European supremacy. England had started the match on a very bright note with left-back Luke Shaw giving his side the lead in just the second minute. Then, Leonardo Bonucci one of Italy's most experienced defenders, equalised for the Azzurri in the 67th minute. The match went on to extra-time at 1-1 and even when that wasn't enough to find a result, the clash moved to penalty shootouts where Italian goalkeeper Gianluigi Donnarumma saved three shots to help his side clinch the win and the title. Cristiano Ronaldo Wins Euro 2020 Golden Boot, Check list of Top Scorers in European Championship This Year

Here is the list of award winners at Euro 2020:

1) Golden Boot: Despite Portugal being knocked out early, Cristiano Ronaldo had a productive Euro 2020 where he netted five goals for his side in four matches. He achieved the record of being the all-time highest scorer in Euro history and also tied Iranian Ali Daei's tally of 109 international goals. Ronaldo was tied with Czech Republic's Patrik Schick for the most goals in Euro 2020 but the Portuguese ace clinched the award owing to the fact that he also had gotten an assist. He also scored these four goals in 360 minutes, lesser than Schick, who did it in 404 minutes.

2) Best Player of the Tournament: Italian goalkeeper Gianluigi Donnarumma was awarded Best Player of the Tournament due to his rock solid performance at the back for champions Italy. He was one of the main reasons for Italy's unbeaten run in the competition. Statistically, he only conceded four goals in seven matches for his side, with three clean sheets and pulled off a spectacular performance in the final, saving three penalties to help his side bag the win and the Euro 2020 title. He is also the first goalkeeper to receive this award.

3) Young Player of the Tournament: Young Spanish midfielder Pedri was named Young Player of the Tournament due to his impressive performance in the midfield for his side. He had played just four matches prior to this tournament but his maturity and control was what attracted a lot of praise and applause from many, including people who compared him to legendary Spanish midfielder Andres Iniesta. Pedri was one of the most important players for Spain and also played all the matches.

4) Star of the final: Veteran Italy defender Leonardo Bonucci was named Star of the final due to his brilliant performance in the summit clash of the showpiece event. Bonucci scored the equaliser for Italy in the 67th minute after England had taken an early lead in the final and overall, the Juventus centre-back had a reasonably good outing alongside partner Giorgio Chiellini, with the duo forming a strong partnership at the back.

5) Golden Glove: England's Jordan Pickford walked away with the Golden Glove award after his spectacular performance throughout the competition. The Everton keeper conceded just two goals and kept five clean sheets for England in the competition. Pickford also saved two penalty shots in the final.  He was one of England's unlikely heroes in their journey as they ended in the runners-up position.

Besides these names. Euro 2020 also witnessed many other star performers like Patrik Schick (Czech Republic), Bukayo Saka (England) and Federico Chiesa (Italy) among others. With Euro 2020 coming to an end and the new season just about to kick in, one can only expect these stars to get better and showcase more memorable performances.

(The above story first appeared on LatestLY on Jul 12, 2021 01:26 PM IST. For more news and updates on politics, world, sports, entertainment and lifestyle, log on to our website latestly.com).