The incident occurred when Azpilicueta was trying to send the ball away from Celso’s reach. While doing so, he dived while kicking the ball and the Argentine Striker landed on Azpilicueta’s leg right leg with his spiked shoes on. The ugly collision between the two also injured the Spanish mid-fielder and he was forced to leave the field. 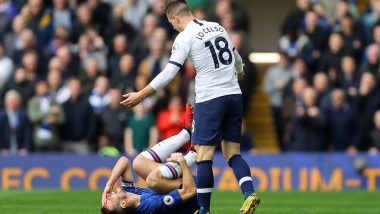 Eyebrows over Video Assistant Referee (VAR) were raised again during the Premier League clash between Chelsea and Tottenham Hotspur. During the 28th minute of the game, Hotspur striker Giovani Lo Celso tackled Cesar Azpilicueta which turned out be nasty. At the first view, it seemed like the Argentine striker might well receive the red card. However, that didn’t happen despite the decision going upstairs. Azpilicueta himself was furious over VAR’s decision and agony was clearly seen on his face. Nevertheless, the incident didn’t have a great impact on the match as Chelsea registered a 2-1 triumph. However, the escape of Lo Celso didn’t go down well with Twitterati as they slammed VAR. Chelsea Promise to Ban any Manchester United Fan Making Homophobic Chants.

The incident occurred when Azpilicueta was trying to send the ball away from Celso’s reach. While doing so, he dived while kicking the ball and the Argentine Striker landed on Azpilicueta’s leg right leg with his spiked shoes on. The ugly collision between the two also injured the Spanish mid-fielder and he was forced to leave the field. VAR reviewed the footage from different angles and took a lot of time for giving the verdict. However, to everyone surprise, Lo Celso escaped from getting punished. Later, VAR agreed that they made a mistake as the Argentine striker should be handed a red card. However,  Netizens were still not amused by the referee’s call and here’s how they reacted.

VAR is having a shocker today. Not only do they fail to send off Lo Celso, they disallow a goal for handball that hit his shoulder 🤦‍♀️

VAR should compensate Chelsea for poor decision made during the matches against Man united and Spurs today.....Marguire and Lo Celso was not sent off for reckless foul😠😠😠😠

There should be another VAR version 2.0 to overrule the decision of the current VAR, Since Stockley park clearly admitted the error on the Lo Celso incident. Absolute shambles to say the least..

Stockley Park made itself look ridiculous today with the Lo Celso decision. It's not the VAR system. The system's doing its job. It's people operating it who are the problem. And why Michael Oliver, our best ref, is not encouraged to view the incident on a monitor is a mystery

So VAR did not see what was wrong with Lo Celso tackle hmmmm VAR in EPL https://t.co/Q2NDcBWClg

Speaking of the game, Olivier Giroud and Marcos Alonso looked at their prime in the game as they both struck a goal apiece and put their side on the driver’s seat. Érik Lamela was the lone striker for Hotspur when Antonio Rudiger accidentally deflected the ball to Chelsea’s net. With this win, Chelsea consolidated their position at the fourth position while Hotspur are placed one place down.

(The above story first appeared on LatestLY on Feb 22, 2020 09:06 PM IST. For more news and updates on politics, world, sports, entertainment and lifestyle, log on to our website latestly.com).