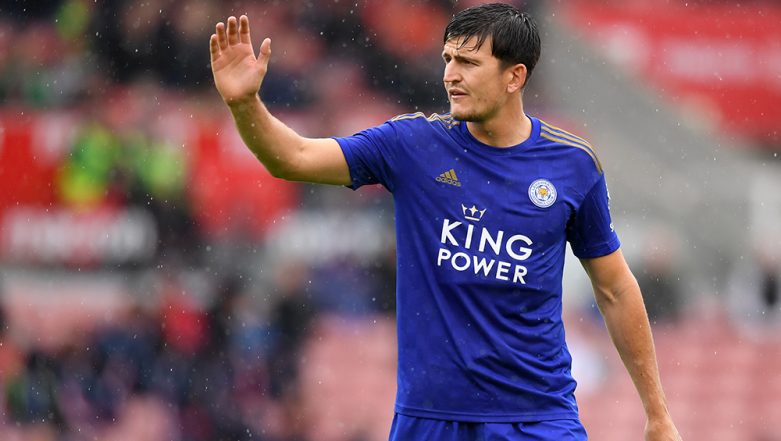 Manchester United have agreed to sign Leicester City defender Harry Maguire for £80m, making the England international the world’s most expensive defender of all time. Maguire’s, who had reportedly pleaded with his club and manager Brendan Rodgers to allow him to join United, long-running transfer sage thus drew to an end in a record deal that will see the centre-back at Old Trafford next season. Manchester United Manager Ole Gunnar Solskjaer Targets More Signings in Search for Fast Start.

A report from The Telegraph confirmed the news of Maguire’s transfer to United. Maguire, whose transfer from Leicester to United solely depended on the fees agreement between both the clubs, completed the move to the Red Devils for a world-record move. The deal was completed after United agreed to pay the required fee. Manchester United Manager Ole Gunnar Solskjaer Says Only ‘Minority’ of Man Utd Fans Want Paul Pogba Out.

Harry Maguire was long speculated to be the prime transfer target of new United manager Ole Gunnar Solskjaer but United refused to pay Leicester’s £80m (Rs 6.77b) price on the defender, while the 2015-16 English Premier League (EPL) champions remained unmoved on their valuation of Maguire. United most recently bid £70m for the 26-year-old but it was rejected by Leicester before both clubs reached an agreement on the player.

Maguire had also been a target for defending EPL champions Manchester City and was his preferred destination but City refused to pay the record fee for the centre-back. City were unwilling to pay more than £55 million to Leicester for the defender.

Meanwhile, Maguire was left out of Leicester’s squad for their match against Serie A club Atlanta on Friday. Maguires has been reported to have signed a five-year contract with United and is set to become Solskjaer’s third signing of the 2019-20 summer after Daniel James and Aaron Wan-Bissaka.