Solskjaer enjoyed a stellar start after replacing Jose Mourinho in December, winning 10 and drawing two of his first 12 Premier League fixtures. But a stunning slump in form saw the side finish sixth in the standings, 32 points behind champions Manchester City. 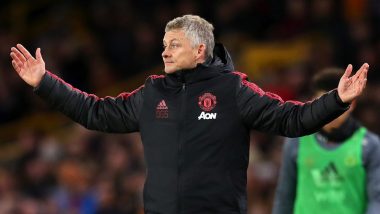 Singapore, July 19: Manchester United manager Ole Gunnar Solskjaer said Friday the club is working on one or two more signings as he hopes to hit the ground running in the new campaign after stuttering badly towards the end of last season. Solskjaer enjoyed a stellar start after replacing Jose Mourinho in December, winning 10 and drawing two of his first 12 Premier League fixtures. But a stunning slump in form saw the side finish sixth in the standings, 32 points behind champions Manchester City.

Aware that his imbalanced squad needed a major overhaul, Solskjaer has already recruited midfielder Daniel James and fullback Aaron Wan-Bissaka, with the club strongly linked to England central defender Harry Maguire and Portuguese playmaker Bruno Fernandes. "We are working on one or two (signings). My objective here though is we have got to get ready for the games and the training sessions," the Norwegian told reporters in Singapore on the eve of a pre-season friendly against Inter Milan. Manchester United Coach Ole Gunnar Solskjaer Denies Receiving Offers for Paul Pogba.

"We are working on putting a squad together which can compete, we have lots of ways which can play. The Premier League is a very competitive league. Our aim is to focus on ourselves, we have to be better and be our only focus. I am sure we will get closer to the top." United have already seen midfielder Ander Herrera depart for Paris Saint-Germain and while question marks remain over the futures of Belgian striker Romelu Lukaku and the talismanic Paul Pogba, Solskjaer is continuing to prepare for the new season with the Frenchman central to his plans.

"I am looking to get everyone to get their form back to when we first came in. It is not just about Pogba, it is about all of us as a team," he said, adding that Lukaku was not fit to face the Italian side on Saturday. "Everyone has been spot on in pre-season in training and the games. I have been very encouraged.

"The start of the season is important, I don’t think many of these players have had a pre-season like this in many years. In the first eight or 10 games, you don’t win anything but you can lose the chance to win anything."

United complete their pre-season programme with matches against Tottenham Hotspur, Kristiansund and AC Milan before opening their Premier League campaign at home to Chelsea on August 11.

(The above story first appeared on LatestLY on Jul 19, 2019 03:53 PM IST. For more news and updates on politics, world, sports, entertainment and lifestyle, log on to our website latestly.com).