How to Watch PSG vs Atalanta, UCL 2019-20 Live Streaming Online in India? Get Free Telecast Details of UEFA Champions League in IST 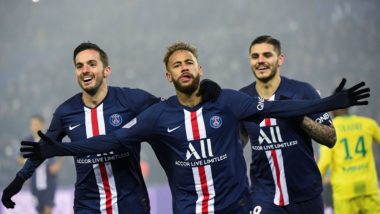 Paris Saint Germain will be looking to make their first semifinal appearance in UEFA Champions League when they take on Atalanta in the final eight clash. The match will be played at the Estadio da Luz Stadium in Lisbon on August 12, 2020 (late Wednesday night) in a one-off tie. Fans from India, searching on how and where to watch Paris Saint Germain vs Atalanta clash in UCL 2019-20, cam scroll down below for more details. Can Injury-Free Neymar Jr Deliver on His Unfulfilled Potential and Take Paris-Saint Germain to 2019-20 Champions League Win.

Kylian Mbappe is very unlikely to feature from the start in this clash as the French forward is recovering from an ankle problem but might come off the bench if needed, Atalanta, on the other hand, will be without the services of Josip Ilicic, who is currently out injured. Both teams are looking to reach the first sem-finals in their history, but unlike the Parisians, this is the Bergamo side’s first-ever Champions League campaign. Kylian Mbappe Injury Update: French Striker May Return to Pitch for PSG Clash Against Atalanta in Champions League 2019-20 Quarter-Final.

Sony Pictures Sports Network are the official broadcasters of UCL 2019-20 in India. So fans can tune into Sony Ten 2 or Sony Ten 2 HD to catch the live action of PSG vs Atalanta on TV.

How to Watch PSG vs Atalanta, UCL 2019-20 Clash Live Streaming Online in India?

SonyLiv is the official streaming partners of Sony Network and will live stream UCL 2019-20 in India. So fans from India can tune into SonyLiv App or website to watch the live streaming of PSG vs Atalanta clash online.

For the first time in two years, PSG have made it to the quarter-finals stage and have their star player Neymar Jr fully fit. With just three matches between them and their first UCL crown, the Parisians will fancy their chances.

(The above story first appeared on LatestLY on Aug 12, 2020 11:15 PM IST. For more news and updates on politics, world, sports, entertainment and lifestyle, log on to our website latestly.com).