Hungary vs France, UEFA Euro 2020 Live Streaming Online & Match Time in IST: How to Get Live Telecast of HUN vs FRA on TV & Free Football Score Updates in India 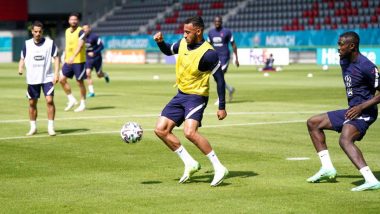 An upbeat France would aim at maintaining their winning run in the Euro 2020 when they face up against Hungary in a Group F match at the Ferenc Puskas Stadium on Saturday, June 19. Starting as underdogs in Group F, Hungary did quite well to keep defending champions Portugal at bay up until the 84th minute when a Raphael Guerreiro effort opened the floodgates. And Cristiano Ronaldo, having smelt blood, didn't let that opportunity go in vain as he netted a scintillating brace to put his team ahead and clinched the win for his side. With this, he surpassed Michel Platini's goalscoring record at the European Championships. Hungary would be aiming to put that match behind when they face France. Euro 2020 Day 9 Schedule: Today's Match With Kick-Off Time in IST, Upcoming Fixtures and Updated Points Table

Didier Deschamps's side, on the other hand, started their Euro 2020 journey with a win over Germany. Although the only goal scored in the game was an own-goal, France has enough arsenal upfront to score goals at will and extend their dominance in this competition.

When is Hungary vs France, UEFA EURO 2020 Match? Date, Time and Venue Details

Hungary vs France Euro 2020 match will be played on June 19, 2021 (Saturday) at Ferenc Puskas Stadium in Budapest. The match is scheduled to start at 06:30 pm IST (Indian Standard Time).

Sony Pictures Networks India is the official broadcaster of UEFA EURO 2020 in India. It will broadcast Hungary vs France, live match on Sony Ten 2 in English, Sony Ten 3 in Hindi, Sony Ten 4 in Tamil and Telugu, Sony Six in Bengali and Malayalam.

(The above story first appeared on LatestLY on Jun 19, 2021 03:49 PM IST. For more news and updates on politics, world, sports, entertainment and lifestyle, log on to our website latestly.com).