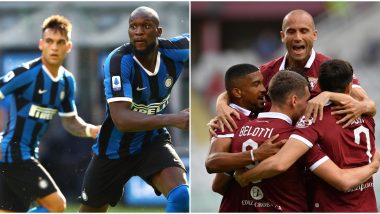 Inter Milan will hope to cut down an 11-point gap with table leaders Juventus when they host Torino in Serie A 2019-20 on Monday. Inter Milan are ranked fourth in the Serie A points table with 65 points from 31 matches and 11 behind Juventus, who also have played a game more. A win against Torino, who have won only twice in their last 10 games, will take Inter to second in the standings ahead of Lazio (68) and Atalanta (67). Torino are placed 16th and are only five points away from the danger zone. Meanwhile, fans searching for all tips and team suggestions to pick the best Dream11 fantasy team for Inter Milan vs Torino Serie A match, please scroll below. Inter Milan vs Torino, Serie A 2019–20 Free Live Streaming Online & Match Time in Indian Time.

Torino have won two and drawn once in their last 10 Serie A matches. Moreno Longo’s side beat Brescia 3-1 in their previous league outing ending a three-match losing run, in which they had conceded 10 goals. They were thrashed 2-4 by Cagliari, lost 1-2 against Lazio and once again routed 4-1 by Juventus in those three games before the win against Brescia.

Torino will miss star striker Simone Zaza for this crucial clash with the Italian striker suspended for accumulation of yellow cards. Inter Milan are missing Victor Moses, Stefano Sensi and Nicolo Barella through injury but centre-back Alessandro Bastoni is available after completing his one-game ban due to a red card.

Inter Milan vs Torino, Serie A 2019-20, Dream11 Team Prediction: Goalkeeper – Inter Milan custodian Samir Handanovic (INT) should be selected as the goalkeeper for this side.

Inter Milan vs Torino, Serie A 2019-20, Dream11 Team Prediction: Midfielders – Christian Eriksen (INT) is a must pick in midfield. Simone Verdi (TOR), Tomas Rincon (TOR) and Marcelo Brozovic (INT) are the midfielders that can be picked to form a four-man midfield.

(The above story first appeared on LatestLY on Jul 13, 2020 04:55 PM IST. For more news and updates on politics, world, sports, entertainment and lifestyle, log on to our website latestly.com).