Inter Milan vs Napoli, Serie A 2019-20: Romelu Lukaku, Dries Mertens and Other Players to Watch Out in INT vs NAP Football Match 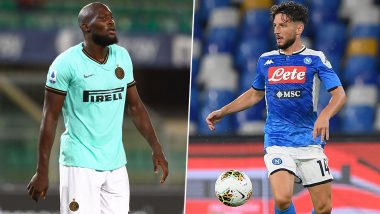 Second-placed Inter Milan will take on Europa League chasing Napoli in their final home game of the Serie A 2019-20 campaign. The match will be played at the San Siro Stadium on July 28, 2020 (late Tuesday night). Both teams recorded victories in their last league game after some disappointing results and will be looking to keep the winning momentum going as they enter into the final stretch of the season. Inter Milan vs Napoli, Serie A 2019–20 Free Live Streaming Online & Match Time in IST.

Inter Milan have been inconsistent post lockdown but with two games left in the season, Antonio Conte’s men will look to secure second place as Atalanta are on their tails. The Nerazzurri’s defeated Bologna in their previous gams thanks to goals from Romelu Lukaku and Alexis Sanchez, who will play an important part in this match as well. INT vs NAP Dream11 Prediction in Serie A 2019–20.

Meanwhile, a defeat to Parma has seen Napoli fall behind in the race for the final Europa League spot. The side from Naples have improved a lot under Gattuso and will be looking to put on a winning run which could take them in Europe for next season.

Both teams have world-class players in their ranks, so in this article, we take a look at the players who could have a huge impact on the final outcome of the game.

The Belgian has rediscovered his lost form since his move to Inter Milan in the summer and has been one of Antonio Conte’s main men this season. The 27-year-old has scored three goals in his last three games and will be looking to continue that scoring run against a tough opposition.

Dries Mertens is another top-class Belgian striker who will be looking to get all three points for his team tonight. The 33-year-old hasn’t scored in his last four games and will be eager to end the barren run tonight. The Belgian has scored nine league goals and will be hoping to get into double figures.

The Chilean has been one of the biggest pluses for Inter Milan since football’s restart from coronavirus suspension. The 31-year-old has been involved in nine goals in his last eight games, scoring thrice and assisting six times. So his form on the night will be crucial for Conte’s men to get all three points.

The Polish striker is tipped with a move away from Naples in the summer with Juventus interested in signing the forward. But his focus will be on tonight’s game and getting all three points. The 27-year-old has scored just twice since league’s restart so this will be a good opportunity for him to add to that tally.

(The above story first appeared on LatestLY on Jul 28, 2020 04:52 PM IST. For more news and updates on politics, world, sports, entertainment and lifestyle, log on to our website latestly.com).