The Catalan giants have, time and again maintained that they are not ready to sell Frenkie de Jong, who has been a long-term target for Manchester United. Manchester United have so far signed only Tyrell Malacia from Feyenoord and are expected to step up in their pursuit of de Jong. 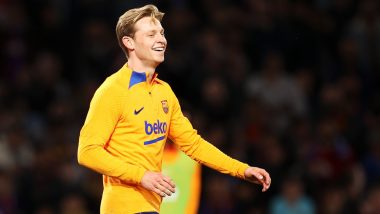 Barcelona president Joan Laporta has insisted that Frenkie de Jong is not for sale, amidst serious interest from Manchester United. The Dutch midfielder has been the Red Devils' top target this summer transfer window as Erik ten Hag wants to reunite with his former player at Ajax. But Barcelona have again reiterated that the player is not for sale.Lionel Messi All Smiles at PSG Training, Shares IG Post (See Pic)

According to noted football journalist Fabrizio Romano, Laporta said,  “Frenkie de Jong is Barcelona player - we don’t want to sell him unless we have no other choice. Of course, we know there are offers for de Jong - but we don’t want to sell him." The last part of his statement might excite Manchester United fans, since Barcelona are in a financially poor situation and might have the need to offload some players. The Catalan giants have reportedly targetted Robert Lewandowski and plan to sign him from Bayern Munich.

Barcelona so far, have made two signings--in Franck Kessie and Andreas Christensen. Manchester United on the other hand, have made their first summer signing in Tyrell Malacia from Feyenoord.

(The above story first appeared on LatestLY on Jul 06, 2022 07:25 PM IST. For more news and updates on politics, world, sports, entertainment and lifestyle, log on to our website latestly.com).