Dortmund had set a deadline of August 10 for United to agree on a deal for Sancho and complete the signing. The club slapped a €120 million transfer fee on the winger and have refused to lower their valuation. United, meanwhile, have refused to pay the amount. The Red Devils have also called out Dortmund’s deadline and termed it as ‘artificial.’ 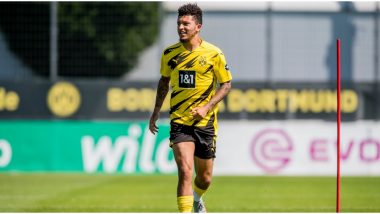 Jadon Sancho is the world’s best young player and Manchester United need to sign top stars like him, says former United centre-back Rio Ferdinand. Sancho, 20, is United’s top priority this summer with manager Ole Gunnar Solskjaer keen to add more quality to this side to make them top contenders for all tournaments once again. Borussia Dortmund’s sporting director Michael Zorc has, however, announced that Sancho will not be leaving the club in this transfer window and will be part of the squad next season. Jadon Sancho Transfer News: Borussia Dortmund Star Has Already Agreed Personal Terms With Manchester United, Waiting for Clubs to Negotiate a Fee.

Dortmund had set a deadline of August 10 for United to agree to a deal for Sancho and complete the signing. The Bundesliga club slapped a €120 million transfer fee on the winger and have refused to lower their valuation. United, meanwhile, have refused to pay the amount. The Red Devils have also called out Dortmund’s deadline and termed it as ‘artificial.’ Despite Jadon Sancho Transfer Bombshell, Here Is Why Manchester United Fans Shouldn’t Be Worried.

United though still believe that they can come to an agreement with Dortmund and sign Sancho this summer despite Zorc’s comment. Ferdinand has backed Sancho to shine at Old Trafford should United eventually manage to complete the signing this summer. “He is fantastic,” the former England defender told BBC Radio 5 Live. “If he does come he'll be an added value in terms of quality, no doubt.”

Ferdinand also called Sancho, who turned 20 this March, the “best” young player on the planet “bar none”. The 41-year-old also feels that Red Devils need top players like Sancho in their squad. "Manchester United need top players who are going to have an effect on their first XI and I think Jadon Sancho falls into that category,” said Ferdinand.

"If you look at successful Manchester United sides over the years, successful periods, there were players fighting for every position and if you substitute one out and you brought one in there was no change in the quality or the output,” he added. Ferdinand, who won six Premier League titles with United and a Champions League, also reserved special praise for Solskjaer for turning the club around.

United have struggled to revive the old glory days since Alex Ferguson’s retirement in 2013. And although the club has seen top coaches like Louis van Gaal and Jose Mourinho take charge, they have failed to win a single Premier League title or play the Champions League final, something which was regular under Fergie.

Under Solskjaer though United have rediscovered their attacking brand of football the fans like and were used to seeing the club play. Ferdinand credited the Norwegian for returning to the "attacking, vibrant football" and helping the club qualify for next season’s Champions League. United have also progressed to the Europa League 2019-20 semi-finals and play Sevilla on Sunday.

"That's been the most pleasing point," said Ferdinand. "He's ticked a box in terms of getting the team back into the Champions League, which I think would have been his remit at the beginning when he got his hands on the reins."

(The above story first appeared on LatestLY on Aug 12, 2020 03:11 PM IST. For more news and updates on politics, world, sports, entertainment and lifestyle, log on to our website latestly.com).