The entry of new head coach means the return of prominent roles for Shinji Kagawa, Keisuke Honda and Shinji Okazaki in the national team. 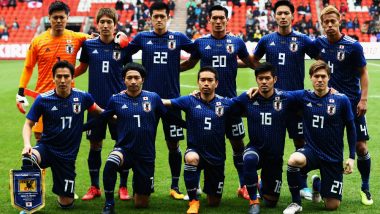 All is not well with Japanese football going into the FIFA World Cup 2018 with the firing of head coach Vahid Halilhodzic, the coach who led them in the qualifiers a few months before the World Cup in Russia. New coach Akira Nishino has a tough task at his disposal to bring about his style of play in the team in a short span of time. What led to his appointment is not clear, but some say Halihdovic’s stand to not include senior Japanese players in the playing eleven may have contributed to his downfall. Japan has announced their preliminary world cup squad including Keisuke Honda and Shinji Kagawa. We will take a look at Samurai Blue’s team lineup, their road to qualification and past performance at the football’s biggest event. FIFA World Cup 2018 Schedule in IST for PDF Download: Fixtures, Groups, Time Table with Match Timings & Venue Details of Football WC in Russia.

In the final 23-man squad for FIFA World Cup 2018, the new coach is likely to go with Eiji Kawashima, a veteran of two World Cups, as his first choice goalkeeper in Russia. Japan has two of the World’s best fullbacks in Marseille defender Hiroki Sakai and Yuto Nagatomo of Galatasaray. The center back pairing would most defiantly be of Maya Yoshida and Masato Morishige. The Japanese midfield consists of their leader Makoto Hasebe who is a versatile midfield player and plays in a box to box role. His decade-old career in Germany has made him well versed with playing at the highest level and is a tough nut to crack. He will be accompanied by Hotaru Yamaguchi in the middle of the park.

The entry of new head coach means the return of prominent roles for Shinji Kagawa, Keisuke Honda and Shinji Okazaki in the national team. The holy trinity is likely to start all the games, and when they are on song, Japan more often than not wins.

Japan was placed in Group B of the third round of the Asian World Cup qualifiers and finished top of the group with 20 points and earn themselves an automatic qualification berth for the 2018 FIFA World Cup in Russia. They managed six wins out of ten, and Genki Haraguchi was their lead scorer with 4 goals in the campaign.

Japan had a poor World Cup in Brazil and lost out to Group C opponents Ivory Coast 2-1, drew 0-0 with Greece and bowed out of the tournament with a 4-1 drubbing at the hands of Colombia.

Makoto Hasebe: He is Japan’s main man, and the central defensive midfielder attributes are not just his crisp passing and crunching tackles, it is the calmness he brings on the field which is of utmost importance in tournaments like these.

Keisuke Honda: He was the talismanic figure in the 2010 World Cup for Japan, and his goal against Denmark is still fresh in everyone’s memory. The veteran striker has played for clubs like AC Milan and CSKA Moscow in his hay days and will love to finish on a high for Japan in Russia.

Japan coach Akira Nishino is likely to announce the final 23-man squad on May 31. They will be playing an international friendly against Ghana on May 30 in Yokohama. Place in Group H, Japan will begin their FIFA World Cup 2018 campaign against Colombia on June 19 followed by a match against Senegal on June 24 and Poland on June 28.

(The above story first appeared on LatestLY on May 23, 2018 01:24 PM IST. For more news and updates on politics, world, sports, entertainment and lifestyle, log on to our website latestly.com).