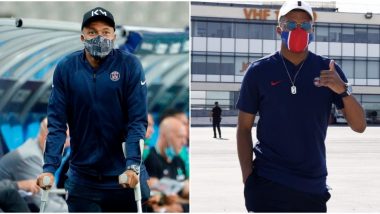 Kylian Mbappe could make a sensational return from injury when Paris Saint-Germain play Atalanta in the 2019-20 Champions League quarter-final this week. The French forward had suffered an ankle injury during PSG’s Coupe de France title win over Saint-Etienne after a horror tackle by opposite captain Loic Perin. Mbappe was presumably set to be out for at least three weeks but has recovered swiftly and could still feature against Atalanta in the UCL quarters. The French forward returned to training this Saturday but is yet to join the squad practice sessions. Cristiano Ronaldo Transfer News: Juventus Star’s Agent Jorge Mendes to Meet PSG Sporting Director to Discuss Potential Move.

Mbappe limped off in the first half of Coupe de France final after an ill-timed challenge by Peric, who was shown a straight red card for that tackle. The 21-year-old later appeared holding crutches and was expected to be out of action for some time.

PSG had confirmed that the World Cup winner had sprained his right ankle and will be out for at least three weeks. It was then taken, that Mbappe will miss the quarters – which was only 19 days away – but be available for the latter stages of the tournament if PSG progress.

But the 21-year-old has exceeded expectations and was named in PSG’s 28-member squad for the knockout stages. He has also travelled to Portugal with the rest of the squad. PSG coach Thomas Tuchel though still doubts his star forward will be available in Lisbon when they take on Atalanta.

“The deadline is short, super short,” Tuchel had told reporters last week. “We spoke with the doctor today and we decided to meet again on Saturday to see what phase he is in and if it is possible that he is on the bench against Atalanta. But I do not expect too much.”

A video taken on Sunday shows Mbappe training alone away from the other members of the squad. In the video, the teenage sensation can be seen working with the ball. He even fires a few shots and looked fit and ready. Mbappe though is yet to join his other teammates in the group session. His availability will do lots to boost the squad with Marco Veratti injured and Layvin Kurzawa and Thilo Kehrer ruled out of the match.

(The above story first appeared on LatestLY on Aug 11, 2020 02:36 PM IST. For more news and updates on politics, world, sports, entertainment and lifestyle, log on to our website latestly.com).