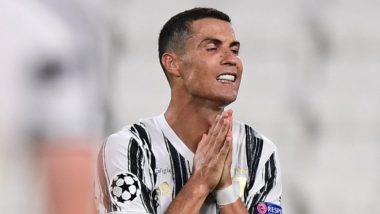 Cristiano Ronaldo wants to leave Juventus for Paris Saint-Germain this summer, say reports in France Football. Ronaldo scored both the goals in Juventus’ 2-1 win over Lyon in the second leg of the UEFA Champions League 2019-20 last 16 but failed to lead his side to the quarter-finals with Lyon progressing ahead on away goals after the scoreline remained 2-2. With Juventus exiting the tournament, this is the first time since 2010 that Ronaldo won’t be part of the UCL quarter-finals, a tournament he has five times. Cristiano Ronaldo Considering PSG Move After Early Champions League Exit.

The premature elimination seems to upset Ronaldo, who now wants to move to France after two years in Italy as he feels there is a better chance to win the Champions League with PSG. Ronaldo and Juventus were also knocked out of the quarter-finals last season by Ajax, meaning Ronaldo hasn’t played the UCL semi-finals since winning it for three successive seasons with Real Madrid from 2015 to 2018. Cristiano Ronaldo Goes Sunbathing With Girlfriend Georgina Rodriguez After Juventus' Champions League Exit (View Pic).

Reports in the French media has already stated that Ronaldo was close to signing for PSG before the COVID-19 pandemic outbreak broke down the move. And now with Juventus’ elimination, talks of Ronaldo to PSG has gained further steam. According to Le10 Sport, the 35-year-old could make the transfer this summer itself.

His agent, Jorge Mendes, will meet with #PSG sporting director Leonardo during the Champions League Final 8 in Lisbon.

It claims that Ronaldo’s agent Jorge Mendes is set to meet PSG sporting director Leonardo to discuss a potential move after the French club’s quarter-final clash against Atalanta. The remainder of the Champions League is set to be played in Portugal and most teams have already reached Lisbon to prepare for their matches.

The 35-year-old five-time Ballon d’Or winner is reportedly frustrated with Juventus’ failure to reach the final four stage of Champions League football for successive seasons and isn’t convinced with the club’s future despite back-to-back Serie A title wins.

Ronaldo joined Juventus from Real Madrid in 2018 and was tipped to be the final key that lead Juventus to European glory for the first time since 1995-96. But that is yet to happen. Ronaldo though still has two years remaining in his current contract at Turin. He scored 37 goals this season, with 31 of those coming in the league which helped Juventus record a ninth consecutive Serie A title win.

Meanwhile, Juventus president Andrea Agnelli dismissed all talks of a possible transfer to PSG for the Portuguese forward. “He’s going to stay with us,” Agnelli told Sky Sport Italia after Juventus’ exit from the Champions League. “I’m sure that Cristiano will play for Juventus next season. He’s a pillar of this team.”

(The above story first appeared on LatestLY on Aug 10, 2020 08:52 AM IST. For more news and updates on politics, world, sports, entertainment and lifestyle, log on to our website latestly.com).