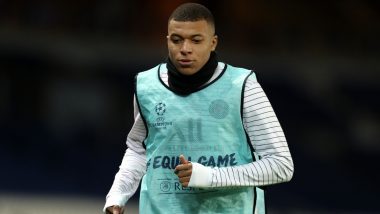 Paris Saint Germain have made a winning return to their footballing action post the coronavirus enforced suspension but it has come at a price. The French giants will be without star forward Kylian Mbappe for their Champions League games against Atalanta which are set to begin in August 2020. However, the young striker could return from semi-finals onwards if they manage to get past their opponents. Kylian Mbappe Transfer News Update: French Striker to Stay at PSG Next Season ‘No Matter What’.

The 21-year-old suffered a heavy tackle in the first of PSG’s Coupe de France final victory over AS Saint Etienne on Friday and as a result, has sustained an ankle injury which will keep him out of the initial rounds of the Champions League. The French forward was in crutches during the trophy celebrations. He will also miss the Coupe de La Ligue final against Lyon on Friday (July 31, 2020). Marcus Rashford Transfer News Latest Update: PSG Make Manchester United Striker Top Priority.

PSG in a club statement said ‘As announced after the final of the Coupe de France against Saint-Etienne, Kylian Mbappe was examined on Monday in order to know the severity of his right ankle injury. The examination performed today confirms a sprained ankle with an external ligament injury. Following this, the recovery time is estimated at around three weeks.’

This means that Kylian Mbappe will not be available for the game against Atalanta on August 12, 2020, but could appear from next round onwards if PSG make it through. This year, UCL knockout games post Round of 16, will be played as a one-off matches in Portugal.

With one of their star player unavailable, PSG will have a tough task on their hands as they are still competing for two trophies. The Parisians were crowned champions for the 2019-20 Ligue 1 season after the campaign was prematurely ended amid the coronavirus pandemic.

(The above story first appeared on LatestLY on Jul 28, 2020 09:50 AM IST. For more news and updates on politics, world, sports, entertainment and lifestyle, log on to our website latestly.com).