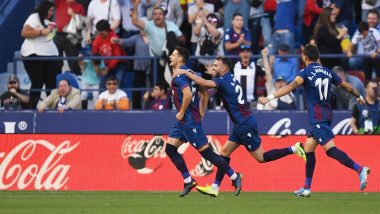 "We are preparing something special for India and we also trying to make some training camps down to India in order to give Indian people the possibility to know how the methodology of Levante academy works in Indian academy teams," Luca Donati, International Business Officer at Levante, told IANS in an interview from Spain. "So we are thinking many ways to open Indian market, but we really know it could be a very interesting market for us and La Liga clubs," he said.

The association includes involvement of the clubs in the organisation of training programmes for the coaches, training kits of the participant students and more engagement opportunities for the students. Donati said Levante have recently opened their English account on social media and that is their way of getting more global fans involved with the club. La Liga 2019-20: Barcelona Slip to Shock Defeat After Levante Goal Flurry.

"We opened just two weeks ago, our account in English, so we are trying to open our border speaking about social media. Recently, one year ago we had been invited from La Liga and Facebook India to your fantastic country.

"We were invited in New Delhi. We got to know how Indian market is important and how the people are crazy for football. Indian market has lot of potential and could be very interesting for us. At the same time, La Liga is now being broadcast for free in Facebook," he said.

"That makes our work easier. We reach many people who follow La Liga on Facebook. At the same time, our social media account in English, purpose is to reach these nations with our communication," Donati added.

FC Barcelona have schools in Delhi, Mumbai and Bangalore while TATA Trusts collaborated with La Liga giant Atletico de Madrid with the overall objective to improve Indian football at the grassroots level. TATA Football Academy (TFA) has been be re-named to TATA Atletico Football Academia as part of the re-branding.

Donati has spent most of his professional career at Levante. After graduating from the University of Genoa and spending a short time working at Costa Crociere, an Italian cruise company, he joined the Spanish club in 2011 and has been there ever since. His role is that of International Business Development Manager, in which he works with a small team of three people.

"Of course, for us one day to compete in international matches like Europa league and the Champions League, it will be a great honour. But for a club like Levante, to be stronger in national competition is the main goal in our mind. To stay in La Liga and compete is the best way we can see football every Sunday," he concluded.

(The above story first appeared on LatestLY on Nov 10, 2019 12:11 PM IST. For more news and updates on politics, world, sports, entertainment and lifestyle, log on to our website latestly.com).