Lionel Messi is a complete package with plenty of assists and goals every season. It is due to his sheer brilliance that he has managed to win 34 titles in his career. As fans miss their superstar in action, we bring his top 5 goals from his long and illustrious career. 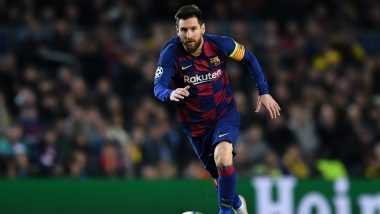 Football wizard Lionel Messi has been missing in action for some time now thanks to the COVID 19 pandemic that has plagued the world. The Barcelona and Argentina striker is a genius with a football at his feet and before the La Liga went on an indefinite break, he was the sole reason the Spanish champions were top of the pile. Time and again the six-time Ballon ‘d Or winning superstar has proved he is the complete showman of the game. Age has had little impact on his form as he continues to go from strength to strength. Lionel Messi in Premier League? Here’s Why the Barcelona Star Will Be A Force to Reckon With in EPL As Well.

Lionel Messi is a complete package with plenty of assists and goals every season. It is due to his sheer brilliance that he has managed to win 34 titles in his career. As fans miss their superstar in action, we bring his top 5 goals from his long and illustrious career. Relive Lionel Messi’s Record-Breaking Night at Santiago Bernabeu During 2014’s El Clasico (Watch Video).

A stunning goal which was a replica of Diego Maradona’s strike against England, a young Lionel Messi dribbled past five Getafe defenders before beating an onrushing keeper to score one of the most popular goals of his career.

Lionel Messi just relishes the El Clasico and in the 2011 Champions League semi-final, he produced a moment of magic that no one can ever forget. Picking up the ball in midfield, he went on a rampage beating the entire Madrid midfield before making a mockery of Sergio Ramos and Iker Casillas effortlessly place the ball in the back of the net.

A match-winning goal like no other against foes Brazil in the 84th minute, Lionel Messi sure knows how to send the fans in wild celebrations. Having started a move on the half-line, the Argentine skipper glided past a host of Brazil players like they never existed. He then let fly a curler which found the top corner to complete his hat-trick.

Lionel Messi’s outrageous chip against Real Betis was nominated for the FIFA Puskas Award. This out of the world strike left the opposition players baffled and saw the Betis fans rise up to admire the brilliance of the man.

Whenever we talk about Lionel Messi’s collection of best goals, his strike against Athletic Bilbao in the 2015 Copa Del Rey final will always find mention. He just nonchalantly created a move from the wings to cut inside four Athletic Bilbao players and then angled his shot in the lower corner to leave the Nou Camp speechless.

It is not an easy task to limit Lionel Messi’s top goals to just five since the little maestro scores worldies every week. In the gloom and doom of COVID 19 , fans can enjoy this special visual treat.

(The above story first appeared on LatestLY on Apr 05, 2020 03:24 PM IST. For more news and updates on politics, world, sports, entertainment and lifestyle, log on to our website latestly.com).