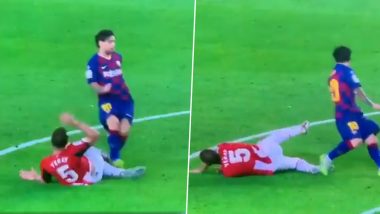 Lionel Messi registered his 250th assist for Barcelona in the narrow win against Athletic Bilbao on Tuesday as the Catalans moved to the top of La Liga at least for the time being. But should the Argentine have stayed on the pitch as the Barcelona captain escaped a booking and possibly more after a dangerous challenge on a Bilbao player? Barcelona 1–0 Athletic Bilbao, La Liga 2019–20 Match Result: Ivan Rakitic Guides Catalan’s to Narrow Win, Fans Praise Riqui Puig’s Impact (Watch Goal Video Highlights).

This is the second time in two games that the Barcelona superstar has escaped punishment after an incident which is deemed as ‘violent conduct’ in footballing rule books. During the game against Sevilla, Messi pushed Diego Carlos as the two were engaged in an ugly confrontation following the defender's challenge but wasn’t cautioned for that.

And during this game, Messi accidentally stomped on Yeray Alvarez’s leg as the Bilbao defender cleared the ball but escaped a booking for his challenge. We have seen people being sent off for such challenges and the six-time Ballon d’Or winner was certainly lucky that he didn’t receive his marching orders from the referee.

Speaking of the game, Ivan Rakitic scored his 50th goal in La Liga as his strike guided Barcelona to a narrow win over the Basque side. Real Madrid have moved to the second spot in the league but have a chance to regain control when they host Mallorca.

(The above story first appeared on LatestLY on Jun 24, 2020 09:42 AM IST. For more news and updates on politics, world, sports, entertainment and lifestyle, log on to our website latestly.com).