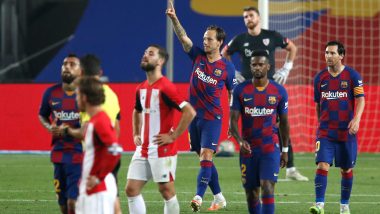 Barcelona are back to winning ways and once again move to pole position in La Liga for the time being with their narrow win against Athletic Bilbao at Camp Nou on Tuesday. Ivan Rakitic’s 50th goal in the league helped the Catalan’s upstage the Basque side on the day who looked resolute in defence. Quique Setien’s men are three points clear at the top with Real Madrid yet to play their game. Fans Can ‘Attend’ Barcelona vs Atletico Madrid Clash in La Liga 2019–20 Through Catalan Club’s New Campaign.

After the draw against Sevilla over the weekend, Barcelona needed a huge performance to keep themselves in the title race. While the display from the Catalan side was far from what is expected of them, Quique Setien’s men managed to grab all three points in a hard-fought clash. Juventus Agree Transfer Fee With Barcelona for Brazilian Midfielder.

After a laboured first half, Setien resorted to quick changes in the second half, bringing on Riqui Puig and Ansu Fati around the hour mark. These changes proved to be vital as they turned the tide of the game in Barcelona’s favour.

Riqui Puig and Ansu Fati show they care about playing for Barcelona every time they play.

Imagine wanting to spend millions on Pjanic when you have a gem like that in your academy.

The Blaugrana club looked more threatening in attack with the two youngster’s introduction and started playing more fluid football. As the home team grew into the game, they managed to break the deadlock on the 71st minute as Lionel Messi found Ivan Rakitic who slotted the ball past Unai Simon in Athletic goal. This was the Argentines 250th assist for the club.

With this win, Barcelona have continued to put pressure on rivals as Real Madrid, as Zidane’s men have at least temporarily moved to the second spot. Los Blancos host Mallorca as they look to regain control of La Liga.

(The above story first appeared on LatestLY on Jun 24, 2020 08:51 AM IST. For more news and updates on politics, world, sports, entertainment and lifestyle, log on to our website latestly.com).