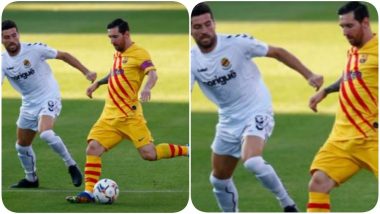 Lionel Messi has sledged many players in his career. Here’s one more addition to the list. So the six-time Ballon d’Or winner reportedly called Javier Ribelles an as**ole during Barcelona’s friendly match against Gimnastic de Tarragona. The match was a part of the preparation for the La Liga 2020-21 where the team won the game 3-1. But here was the highlight of the game where Messi reportedly was furious with Ribelles for marking him. Now, this surely did not go down well with him he abused the defender. The match was played at the Camp Nou where Messi played for about 45 minutes. Lionel Messi Joins Barcelona Training Session for the First Time After Transfer Request Episode (Watch Video).

As reported by many websites, Messi was heard saying, "What are you doing, idiot? "Do you want to stop kicking me, asshole?" Despite this, the defender was not willing to back out and he in turn retorted by saying, "It's that if you're the best I have to kick you, I can't let you turn because you're going to beat me." The match was quite a cakewalk for the hosts as they won the game 3-1 as mentioned above.

From the side of the hosts, Ousmane Dembélé, Antoine Griezmann and Philippe Coutinho were the ones who scored a goal Griezman and Coutinho converted a penalty into a goal. Whereas for Coutinho, this was his first outing after he was loaned out to Bayern Munich. Coutinho had scored a couple of goals during Barcelona vs Bayern Munich, Champions League 2019-20 wherein Messi's team lost the match 8-2.

(The above story first appeared on LatestLY on Sep 17, 2020 12:44 AM IST. For more news and updates on politics, world, sports, entertainment and lifestyle, log on to our website latestly.com).