Lionel Messi ‘Tired’ of Being Blamed for All Barcelona’s Problems

Not too long ago, Antoine Griezmann's former agent Eric Olhats accused Lionel Messi of running a "regime of terror" at the club. Reacting to Olhats's accusation, Messi expressed his frustration for being held responsible for everything in Barcelona. I am tired of always being the problem with everything that goes on at this club," he said to reporters. 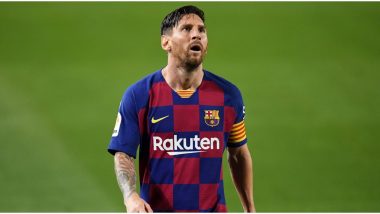 It's no secret that Lionel Messi isn't enjoying a gala time with Barcelona and is all but likely to make a move as soon as his contract ends next summer.  Not too long ago, Antoine Griezmann's former agent Eric Olhats accused him of running a "regime of terror" at the club. Reacting to Olhats's accusation, Messi expressed his frustration for being held responsible for everything in Barcelona. "I am tired of always being the problem with everything that goes on at this club," Messi said to a pack of reporters at El Prat airport in Barcelona. Lionel Messi Transfer News Latest Update: Manchester City Preparing New Bid for Barcelona Talisman This January.

Although Griezmann has always maintained that his relationship with Messi is healthy, his former agent Olhats claimed that Argentina talisman is exceptionally dominant and is even responsible for the Frenchman's failure at Barcelona. "Antoine (Griezmann) arrived at a club with serious problems where Messi controls everything. He is both emperor and monarch and wasn't happy with Antoine's arrival. His attitude has been deplorable; it has made him feel (displeasure)," Olhats said last week. Lionel Messi ‘Difficult to Manage’ Admits Former Barcelona Manager Quique Setien.

Notably, Griezmann has stated that he hasn't talked to Olhats since long. In fact, he and Messi joined forces brilliantly in Barcelona's last game against Real Betis before the latter joined Argentina for 2022 FIFA World Cup Qualifier. However, Messi's latest remarks only add fuel to the speculations that he'll leave Camp Nou next year.

The 33-year-old – who has been with Barcelona since 2001 – even expressed his desire to cut the ties after Catalan side's 2-8 defeat against Bayern Munich in UEFA Champions League 2019-20. He reportedly made a deal with Manchester City, but Barcelona didn't let him leave.

In September, Messi said his main problem was with the then club president Josep Maria Bartomeu and his management over the past few years. However, Bartomeu resigned in October – making way for a new president – which will be elected in January – to make a deal with Messi. However, the legendary striker's extension with the La Liga giants seems highly unlikely.

(The above story first appeared on LatestLY on Nov 19, 2020 12:32 PM IST. For more news and updates on politics, world, sports, entertainment and lifestyle, log on to our website latestly.com).