Messi’s current contract at Barcelona ends on the summer of 2021 and although talks of a contract extension had been on for recent months, the Argentine has shelved all talks. Reports also suggest that Messi is in no hurry to sign a new contract and is patiently waiting to find out the direction and future plans of the club. 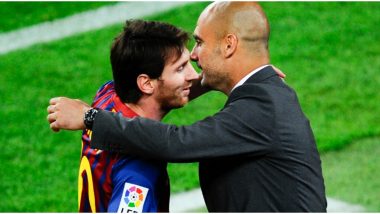 Pep Guardiola has refused to be drawn towards speculations suggesting that he could be reunited with Lionel Messi at Manchester City. Days after reports emerged that the Argentine had refused to sign a contract extension at Camp Nou, speculations have already been doing rounds that he could seek a move to the Etihad and rekindle his partnership with Guardiola. But the Spanish manager has refused to be drawn on any such rumours and instead reiterated that he wishes Messi remains at Barcelona and sign a contract extension. Lionel Messi Would Be Tempted to Join Pep Guardiola at Manchester City, Says Rivaldo.

Messi’s current contract at Barcelona ends on the summer of 2021 and although talks of a contract extension had been on in recent months, the Argentine and his representatives have reportedly shelved all talks after few disappointing results. Reports also suggest that Messi is in no hurry to sign a new contract and is patiently waiting to find out the direction and future plans of the club before taking a call on the contract situation. Antoine Griezmann Goal Video: Frenchman Channels Inner Lionel Messi to End Goal Drought in Barcelona’s 4–1 Victory Over Villarreal.

His reluctance to sign a new contract has, however, alerted other clubs with Man City and Paris Saint-Germain among few clubs that can truly fund the transfer should Messi be available in the market. City head coach Guardiola has, however, refused to be drawn into any speculations and is reluctant to be dragged into a debate regarding the club’s potential targets.

“I’m not going to speak about transfers until the end of the season,” the former Barcelona coach was quoted as saying by Goal. “My wish is that Messi is going to stay in Barcelona.” He also refused to speak on other targets, including reports of City chasing a centre-back to replace former club captain Vincent Kompany.

“At the end of the season. We still have incredible targets to fight for,” Guardiola added when pressed on about transfer targets.

Meanwhile, City suffered a shock 0-1 defeat to Southampton in the Premier League and are still alive in the FA Cup and UEFA Champions League. Guardiola's side have also won the Community Shield and League Cup and will be confident of lifting a third straight FA Cup title.

(The above story first appeared on LatestLY on Jul 07, 2020 10:28 PM IST. For more news and updates on politics, world, sports, entertainment and lifestyle, log on to our website latestly.com).